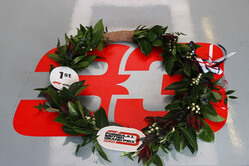 Max Verstappen: "That was good fun. I'm of course happy to score the three points and it's quite funny to have a pole position from the race as well but we will take it. Around here it is difficult to pass but we had a good start and a good fight with Lewis on the first lap. From then we tried to do our own pace but we were pushing each other hard right to the end as you could see the tyres were blistering which we all had to manage. Starting the race on lower fuel we could really push the cars hard through the fast corners, lap after lap, which means it is naturally hard on tyres but we all have the same to watch out for. We now can't touch the cars for tomorrow and we learnt today that it is very close again with us and Mercedes. It seems that we are very quick in the corners and they are quicker on the straights so tomorrow it's going to be a really exciting battle and the Team did a great job to manage the new format this weekend. I also want to say a big thank you to the fans. I know they are mainly here for the British drivers but it is still great to see them here cheering and all I want is a good battle with Lewis and everyone else tomorrow which should keep the fans entertained."

Sergio Perez: "It's a real shame to have to retire from the sprint race today as the car felt quite good. It was a poor day for me and I can only say sorry to the Team as I lost the rear of the car while battling with Lando which ruined our day. I was in the middle of the corner, already picking up quite a lot of throttle and I think I got caught in a bit of dirty air and became a passenger really early in the corner. I avoided any contact but after the spin we had too much vibration on the tyres and that was it. The Team were worried about the damage that could be caused with the vibrations, and there wasn't anything more to gain, so they made the decision to retire the car. We're at the back of the grid tomorrow and it's not easy to overtake here, but we look like we have a lot of pace in the car so you can be sure I will be pushing hard to score as many points as possible. It's a low point for me, but tomorrow is a new day and I look forward to seeing what we can do."

Christian Horner: "It's fantastic to be starting on pole for the British Grand Prix, which was achieved in a different way with Max winning the first ever sprint qualifying race. This marks our first pole at Silverstone since 2011 and breaks the Mercedes nine-year pole position streak. The race start was crucial for us and Max got a great launch off the line. We knew Lewis was particularly strong in Sector 1 so staying ahead down the main straight was particularly important for us, which he did and maintained the lead until the flag. It's just a shame that we haven't got Checo up there as well following that high-speed spin when he lost the rear in the dirty air. Thankfully Checo avoided the wall but the level of vibrations were so high we opted to retire him in order to fully check the car over and complete the necessary safety checks, once permission is granted, before the race tomorrow. You can see there was very little between us and Mercedes today, we were quicker in the corners where they were mighty in a straight line. The temperatures look set to sore and tomorrow's Grand Prix won't be a repeat in terms of tyre wear. The higher fuel loads at the start of the race mean the cornering speeds will be slightly lower, giving the tyres an easier workout in the corners at the beginning of the race, so it will be interesting to see how that affects things. It's fantastic to be staring on pole position and I hope the fans enjoyed the action and a different format of racing today."