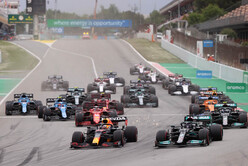 Anticipating the new engine formula from 2025, Red Bull boss, Christian Horner wants the sport to start with a clean sheet.

Late on Saturday evening, F1 and the FIA issued a brief statement on social media following discussions over the engine formula from 2025.

"Very positive discussions took place today with all of the current and potential new Power Unit suppliers regarding the next phase of the Formula 1 Power Unit," it read.

"The discussions will continue over the coming weeks with further news to be announced following those discussions," it concluded.

Other than the current manufacturers, including Red Bull Powertrains, which doesn't officially enter the sport until next year, the "potential new suppliers" attending the meeting were Porsche and Audi, both of whom have been linked with the sport for as long as anyone can remember.

While the sport can essentially do whatever it wants in terms of the cars, power units are a different matter entirely.

Though the hybrid era has proved to be a massive success, technologically and environmentally speaking - even if the sport hasn't shouted it from the rooftops - moving forward F1 must become ever greener. Indeed, with many countries looking to ban the 'traditional' fossil fuel combustion engine within the next decade or so, the move to electric would appear to be only a matter of time.

In the short term however, the sport needs to agree the formula from 2025, and with that in mind, Red Bull, which enters as a manufacturer from next season, is seeking a "clean sheet".

"Personally my feeling is that we've got an opportunity to do something really good for the sport," Christian Horner told Sky Sports, "there are potential newcomers as well.

"We'll be up and running as effectively a new supplier by then," he said of 2025. "This engine will be with us for the next ten years when it is introduced and I'd rather take the time to come up with something exciting, different and relevant that fits the criteria of cost, performance and encourages close racing, and also not discount sound and emotion.

"It would be a great shame to carry over what is a very expensive engine and try and make it cheap," he added. "You can't fly in first class and pay an economy ticket.

"Hopefully there is an opportunity, particularly if it is for 2026, to come up with an engine that is sustainable, environmentally friendly, uses biofuel, that is a bit more of a clean sheet, perhaps with elements of standardisation where costs can clearly be controlled, rather than just carry over what we currently have.

"I would have thought any new manufacturer coming in would be keen to have a clean sheet," he continued, a clear reference to Porsche and VW, both of whom have made clear their desire to see a formula more in line with the move towards alternative energy seen in road cars.

"You can understand existing manufacturers having invested in these engines wanting to roll over IP into the new engine but of course this current engine is extremely expensive and how you reduce the cost at the moment in all the discussions, it hasn't been achieved.

"It's not as easy as just implementing a cost cap as the engine is much harder to police when combustion applies to many other aspects, especially when you're an OEM-owned team.

"I think to start with a clean sheet, that can be clearly controlled, you choke the amount of dyno and rig time you're allowed, so that encourages creativity. There needs to also be a safety net that if a manufacturer gets it wrong they're allowed to effectively catch up.

"Therefore for me a clean sheet for 2026 for me I think for Formula 1 would be the right way to go."