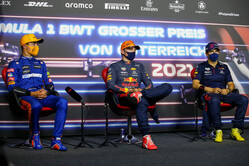 Max Verstappen, pole position, what an incredible result - a double pole for Red Bull at home. All the fans must have given you extra energy. Tell us about the lap?
Max Verstappen: I think Q3 was pretty bad. I'm happy to be first but not the way we got it, so something to look into. But of course to be twice on pole here is very good, so yeah, hopefully we can finish it off tomorrow.

Well the team has really shown its strengths over the last couple of races and it's great for the championship. Is there something that you are thinking about tomorrow strategy-wise or something that you need to focus on?
MV: I mean, it's of course softer compounds compared to last week so it will be tough to manage those in the race but besides that we will just try to focus on our own race and of course we will try to win it. But it's never straightforward, but we will see.

Lando! Long-time, man. What a result! Second place. Everybody screaming for you, Austria loves you. You do so well here. Well done. I hope Zak gives you another broken rib like last year. How do you feel after that?
Lando Norris: I feel epic. Yeah, it was cool. I guess after the last race I wanted to do that one more step and I did two more, so yeah, it's nice. It puts us in a good position for tomorrow. It was probably one of my best laps that I've done I think. It was a good feeling and yes, just lovely to share this moment with you.

Everybody give him a nice big cheer and you have to tell us all where you ate your schnitzel because we've got to go there later.
LN: Yeah, cheers everyone. The fans are cool here, everyone in orange, supporting McLaren and not Max! It's cool to have them back. I know tomorrow's race is going to be tough but we did the best job we could today. I don't know how far I was off pole, bit gutted I didn't go pole, but yeah I'm happy with P2.

Sergio, you made it a double top-three for Red Bull this weekend. Huge improvement from last weekend, what made the difference?
Sergio Perez: Yeah, well, it's been a really hard weekend up until now. We've been chasing the balance a lot and just exploring the car in all areas and just chipping away every single run. It didn't come easy, it was very hard work - harder than you may think! But in the end we got a good lap and a good starting position for tomorrow, because I believe that tomorrow we have a better race car than quali.

Max, many congratulations. Your third consecutive pole position of the season, a one-three for Red Bull as well. Can you tell us about the session and maybe elaborate on why you said earlier that Q3 didn't go quite as well as you had hoped?
MV: Yeah, I didn't use those words! Q1 and Q2 were very good. It was all going really smooth and the laps were good enough and nice. Just in Q3 I locked up in Turn 3, so that wasn't amazing. And in the second run I was the first car out so I just lost time on the straights, so I couldn't improve my lap time even with a more normal Turn 3. Still good enough for first but I would have just liked to have a better Q3.

If Q3 had gone better for you how much more time was there in the car?
MV: A bit. I mean, I can see already what's going on my dash of course. So yeah, a bit like the Q1 and Q2 margins I think.

And Pirelli have brought their softest compound this week. How different did that make in Q3?
MV: I think they were just a tiny bit faster than the previous softer set. Two tenths? Driving wise it doesn't really make a lot of difference.

Max, looking ahead to the race tomorrow, how useful is it for you to have your team-mate starting in third place?
MV: Of course what we like is to have both cars in the front so we look forward now to try to have a good race and score a lot of good points for the team and hopefully it works out well. We have softer compounds of course than last weekend so it will be a bit more difficult to manage those but it's for everyone. So, I'm just looking forward to tomorrow now.

In front of a full house as well. Can you just give us a word on what it was like to perform in front of those grandstands?
MV: I mean, of course, personally I wasn't very happy after Q3 but in general, during the whole day it was really enjoyable to see all the fans. I think even before Q1 started they were just jumping and bouncing around and having a good time, especially of course already with the last one-and-a-half years with what everyone has gone through, and then to open it all up again and everything seems a bit more normal. To see all the fans cheering. It's an amazing sight and, of course, it doesn't matter if they are orange or not, just in general to see the fans there is amazing. So, hopefully we can give them a good race tomorrow.

Lando, coming to you, huge congratulations, your first front-row start in Formula 1. Just describe how this feels.
LN: It feels really good to be here with Max and Sergio. It feels like we made a good step forward from last weekend with a couple of things. I was kind of... not frustrated but I thought there was a little bit more in it last weekend - especially to be ahead of both the Mercedes cars and that's what we did today. The whole of quali was pretty good; pretty straightforward and good laps and so on. Then, I definitely saved the best 'til last and did my best lap in Q3, Run Two. So, I'm obviously very happy. I've got a great position for tomorrow and I think we maximised everything we could today. Yeah. I was only four-hundredths away from P1, so it would have been nice to do that little bit more but I'm very happy with where I am.

Would you say that final lap in Q3 was one of your best-ever qualifying laps.
LN: Quite possibly. I think most corners I definitely did my best laps on. I was actually just behind Max, so I was P2 on track and was a bit nervous I was going to start losing a lot in the straights - which I did but I made up for it in the corners. Especially the high-speed. I took quite a few more risks and that's where I found a lot of my lap-time and it paid off in the end. So, it's a cool feeling - especially around here, it's a pretty awesome track to really push it on and to try to find those last couple of hundredths. Especially taking risks and not taking risks and so on - so it's a good feeling. Definitely rewarded myself nicely.

So, what are the goals for tomorrow. Can you carry this form into the race? Not another P5 surely?
LN: Why not! Probably another P5! We'll do our best to try to take a step forward and go in the right direction - but it wasn't like we were exactly close last weekend. And now, we have that little bit more of a step. I don't want to be too negative, I want to be optimistic as I should be - but I'm also realistic and know it's going to be a very tough race. We're in the best position possible to maximise everything but if I have a chance to go for P1, a chance to race Max and go for it, then I will. I'm still doing that, I'm still racing, I still want to do the best I can - but I think I also know what's best for us, what's best for myself and the team and who we are - sadly - really racing against in the race tomorrow.

Sergio, this is your best start at the Red Bull Ring. Well done. How pleased are you with this performance?
SP: Well, I think it's been a very difficult weekend. Right until the end we've been chasing the balance all weekend through. A lot of compromises, a lot of changes, exploring quite a bit the car in this second weekend to try to learn more about the car. And then, at the end we got a reasonable lap. The most important is that we've got a good starting position for tomorrow - because I think definitely in the race we are stronger than in qualifying. So yeah, looking forward to tomorrow. I think there is so much to play for still with the softer compounds. It's not going to be as straightforward a race as it was probably last weekend.

And what are your goals for tomorrow, Sergio?
SP: To score as many points as possible for the team, to have a good start and manage my race and try to maximise everything we've got. I think definitely there is good potential for tomorrow, so just make the best out of it.