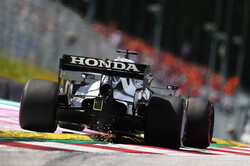 Cleary unable to comprehend why it suddenly finds itself on the back foot having totally dominated the hybrid formula to date, in recent weeks Mercedes has made numerous hints at a performance upgrade by Honda.

Of course, such an improvement would break the rules as the only changes that can be made to the power units is in terms of reliability, nonetheless the suggestions that 'something is not quite right' have continued, and even after today's second session Lewis Hamilton was casting doubt on the Japanese manufacturer's power units.

Asked if Honda the recent second unit supplied to Red Bull and AlphaTauri offered a step-up in performance of an estimated 15bhp, Tanabe laughed. "I'm very happy if it is true," he replied, "but it's not true.

"Under current regulations, any performance update is not allowed to apply during the season," he added. "As a result, our second PU is the same as the first PU in terms of specification and performance.

"The current performance improvement is a result of the hard work of Honda and the teams," he continued. "Under the current PU regulations, we need to submit any changes, so, only allowed to change for reliability, cost reasons and logistics.

"Then we need to submit very detail to the FIA first and then the FIA approve the changes and the FIA distribute documents to the other PU manufacturers.

"We need to have approval from other PU manufacturers to change any single part's specification," he insisted. "So, we are very careful to change the performance. And it is not possible to improve performance during the season. That is my answer to that suspicion.

"We have been learning gradually how to use the PU," he added. "We improve our weakness, and then we push our strengths. As a result, the base specification, the performance, is the same, but trackside performance I believe we have been improving."

Asked if he regretted Honda's decision to leave F1 (again), his response was immediate: "Personally, yes...

"But regardless the result of this year's championship, or our result, I think Honda decision will not change from the previous one, which means leaving Formula 1."