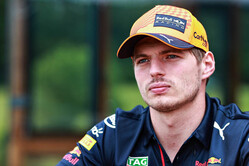 Following the FIA's admonishment for performing a burn-out after winning the Styrian Grand Prix, Max Verstappen has joked that next time he'll perform a do-nut instead.

Article 43.3 of the sporting regulations stipulates that any post-race celebrations by drivers must be carried out within strict limits. The rule makes clear that any celebration must be "performed safely" and "not endanger other drivers or any officials", "does not call into question the legality of his car" and "does not delay the podium ceremony".

Consequently, when Verstappen executed a burn-out moments after winning the Styrian Grand Prix, race director, Michael Masi was not amused and warned Red Bull that there must be no repeats.

"It was not an ideal situation," said Masi, "which is why I spoke to the team immediately and told them accordingly, that it's something that would not be tolerated in the future."

"I'll try to do a donut next time," laughed Verstappen when asked about Masi's reaction to the burn-out. "I understand about safety, but I looked in my mirrors, took it all the way to right and took it easy. Everyone was on the left, and then I just did a burnout.

"If it's not allowed I won't do it again," he added, "but at the time I thought it was really funny and safe, but of course I understand they don't want to see this happening again, which is fine for me."

Two-time world champion, Fernando Alonso opined that the FIA had bigger issues to focus on.

"I like when you can be yourself," said the Spaniard, "and I think this burnout was nice to watch, even the donuts sometimes in Abu Dhabi, the fans like that. You see a lot of videos of those moments on social media, so the fans they like that.

"The FIA should police more the track limits and Turn 1," he added. "I was the only one making a move into Turn 1 at the start and the two cars that I overtook missed Turn 1 and exited in front of me," he added, referring to the warring Charles Leclerc and Pierre Gasly.

"There is no warning on that and there is for the burnout, so there are things that we can improve for the fans' point of view."