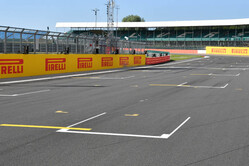 Ross Brawn says that the winner of the Sprint Qualifying race will be the driver credited with having won pole position.

The F1 MD was keen to clear up confusion over the fact that many had assumed the driver quickest in qualifying for the Sprint Qualifying race - and therefore starting it from pole position - would be credited with having won pole. However, Brawn says that it is the driver who wins the Sprint Qualifying race, and therefore starts the Grand Prix from pole, that is officially the pole winner.

"I probably have to correct something I've said before because initially we thought it would still be the Friday qualifying," said Brawn, according to Motorsport.com. "But, in fact, after discussions with the FIA, they feel pole position is the guy in front of the grid for the grand prix.

"So it's the person who finishes a sprint in first place, it's the one who is on the front of the grid and has pole position for the race, the Grand Prix, on a Sunday. And that's what we'll count statistically towards the number of poles, because it is the sprint qualifying.

Brawn also confirmed that there will not be a podium ceremony following the Sprint Qualifying race, nor will the event feature the usual pre and post-race procedures.

"We are trying to give a little bit of a fresh flavour, so that there'll be a shorter period going on to the grid. There won't be the driver parade, but there'll be opportunities on the grid to interview the drivers.

"And we've got some interesting things we want to try after the race, short, sharp," he added. "There won't be a podium, it will be rather like qualifying, because we want to keep the podium for the big event of the weekend.

"We'll just keep that in the bag, but there are some fresh things that we're doing with the sprint, which I think will be nice to try.

"I guess to meet the criticism head-on, some people like the traditional approach and think we're messing with something that doesn't need messing with, and I understand that.

"As you know, I've been in the sport a very long time. I think the way we're exploring this opportunity is not going to damage F1 at all, and it will become clear, after the second or third of the events, how well this is succeeding, and how well the fans are engaging with it.

"We've got new graphics, we're doing a lot on social media in the next week or ten days. So we're doing a lot to explain to our fans, what this is all about so that, when they turn the telly on at any stage, over the Silverstone weekend, they know exactly what's going on."

Of course, while there won't be a podium or any of the 'traditional' pre or post-race procedures there will no doubt be time allowed for the event's newly announced sponsor, Crypto.com, and any other sponsors F1 can pick up along the way.