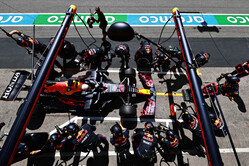 Its moves against Red Bull in terms of bendy rear wings and manipulated tyre pressures seemingly having failed, the FIA now turns its attention to the Austrian team's lightning pit stops.

Other than topping the drivers' and constructors' standings, Red Bull is also leading the way in terms of super-fast pit stops, six of the fastest stops this season recorded by the Austrian outfit.

In Bahrain, Max Verstappen was turned around in 1.93s, while the closest any other team has got to beating that is Aston Martin, who serviced Lance Stroll in 2.08s in Portugal. Poor old Mercedes doesn't even make the top ten.

Curious then that the FIA is now acting on these rapid stops, sending out the inevitable technical directive which warns of a clampdown from the Hungarian Grand Prix at the beginning of August.

The FIA makes clear that the move is pre-emptive rather than reacting to a particular incident, however sceptics will no doubt find it odd that the move comes just seven days after Red Bull's powerful undercut for Verstappen in France effectively turned the race on its head - that and the subsequent switch to a two-stop strategy.

According to the technical directive, which has been sent to all the teams, the FIA is "concerned" at the level of automation taking place during these stops fearing that it is at odds with human reaction times and is therefore a safety concern.

Article 12.8.4 of the technical regulations state that: "Devices which are used to fit or remove wheel fasteners may only be powered by compressed air or nitrogen. Any sensor systems may only act passively", and it is this that has spurred the FIA into action.

From the Budapest race, pit stops must have a tolerance that allows for human reaction times. In the case of wheelnuts being regarded as tightened this is seen as of 0.15s before a signal is given to the jack man to drops the car at which point a further 0.2s must be allowed.

"For safety reasons we would furthermore expect the minimum time offset between the initiation of the jack release procedure and the OK signal to the driver given by the green light to be at least 0.2 seconds," reads the technical directive.

While the FIA insists that no particular team is being targeted (ahem), the move will surely go down well with Mercedes, the German team still smarting from Valtteri Bottas' 48-hour stop in Monaco.

In France it was clear that Red Bull, whose stop in Brazil in 2019 was timed at 1.82s, an all-time record, hasn't been compromised by the technical directives on rear wings or tyres pressures, and while we wait to see if there is action following suggestions of a new spec engine in the Red Bull, it would appear the powers-that-be are leaving no stone unturned in their efforts to thwart the Austrian outfit.

However, rumours that time penalties will be imposed on Dutch drivers should the Netherlands progress any further in the Euros, or a weight handicap imposed on cars sporting sponsorship from sugary energy drinks are thought to be wide of the mark. For now.