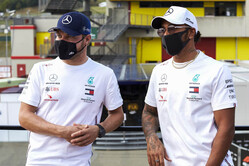 Lewis Hamilton has confirmed that talks with Mercedes over a new contract are underway, as the Briton admits his desire to keep Valtteri Bottas as teammate.

With this year's contract not being agreed until early February, just weeks before pre-season testing got underway, Mercedes and Lewis Hamilton have made no secret of the fact that this time around they want to get things wrapped up a lot sooner.

Speaking to reporters at the Red Bull Ring today, Hamilton confirmed that talks are already underway and are positive, and that he hopes to keep Valtteri Bottas as his teammate.

"We have begun discussions," he told reporters. "There's not a lot to say... we have started discussions and things are positive."

Asked about his potential teammate, he said: "Valtteri is my team mate now and both of us have had ups and downs in our careers, but like I've said, he's a fantastic team-mate and I don't necessarily see that it needs to change."

Earlier this week, Toto Wolff said that it is inevitable that a new deal will be agreed.

"Our relationship between the team and him feels so natural today, through highs and lows," he told ESPN. "I cannot imagine us and him going in separate directions next year."

Asked who this year's deal with Hamilton was just for the one year, he said: "It was a one-year deal because we didn't get to spend enough time with each other (negotiating further). But that is what we are doing now, we are spending time with each other privately and obviously here (at the race track) in a business environment."

Meanwhile, attention shifts to that little matter of the 2021 world championship.

"I've generally been working flat out, in the past few days," said Hamilton. "There's been a lot of Zoom meetings, a lot of calls with everyone at the team.

"It has been really encouraging and inspiring to see everyone flat out," he continued, "everyone just leaving no stone unturned, I got to be at the factory yesterday, so again just good to see and speak to the team, and just continue to encourage them to keep pushing as that's what we're doing.

"We need everyone to bring their A-game to be able to fight these Red Bulls," he admitted. "We know how strong they are, there's three long straights here and you could see how much time they were taking out of us on the straights in the last race. It could be the same here, we'll wait and see.

"But I come here with an optimistic approach that what we've learned in the last race, what we've learned since then, will hopefully help us take a small step forwards, even if it's 0.01 per cent, that's a step in the right direction."