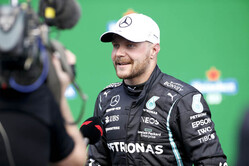 As speculation over his relationship with Mercedes intensifies, Valtteri Bottas insists that it isn't broken.

For many, Valtteri Bottas' weary outburst during last weekend's French Grand Prix represented a clear sign of the Finn's growing frustration with the German team.

The Finn was referring to the fact that the team's decision to stick with its one-stop strategy had cost him any hope of a podium finish, far less a win, and followed the decision to pit him before Lewis Hamilton, even though it traditionally pits its leading driver first.

The outburst was the clearest sign yet of the Finn's frustration, and follows the incident in Monaco when a stuck wheel nut cost him an almost certain podium.

"There's no issues and that kind of situations are normal," he continued. "I'm sure not all the things that are said are being broadcasted.

"What has brought us, as a team, this far is that we are always being direct, always being honest with your feelings, if you feel there's room for improvement, so it's nothing new and everything is good."

Asked specifically about his radio outburst, which is understood to have been given the thumbs-up by Toto Wolff, Bottas said: "I always try to be direct and I'm glad he liked it but I was not that happy, obviously, in that situation.

"That's racing, there's emotions" he continued. "It's hard to describe that feeling when you are in the car, and we are not in a tea party, we are in an elite top sport. I want to do well, I want the team to do well, so there is emotions, even for a Finn."

Asked if he was happier with the team's explanation as to why it left him on a one-stop strategy, he said: "Happier is not maybe the right word, but I understand more and more things.

"Obviously when you're in the car, you have a bit limited view of the race situation, so it was important to go through everything as well as I always do.

"So, I do understand the situation better but still, the fact is, in this situation I was in with my tyres at that point, it was sub-optimal, but we can't go back in time, and we always keep learning."

In terms of a new contract, the Finn, who has signed a series of one-year deals with the Brackley-based outfit admitted that speculation over his future is nothing new.

"It's not a new situation for me," he said, "every year I've been in the same situation, waiting for my future to be clear for the next year.

"Everyone knows how this sport works," he continued, "if you make results, you earn your place where you deserve to be and if you don't make results, if the team feels it needs to make a driver change then they'll change the driver.

"It's very simple in this sport and, again, I'll go back to saying there are still 16 races to go. The team knows what I'm capable of, how valuable I've been in the recent years in getting the championship.

"It's not yet time for those discussions. We're in the middle of a triple header, with still two races to go in the next two weeks, but I'm sure in the off weeks there will be time to discuss, when it's going to be the time. That's the situation I'm in and that's the situation I need to try and maximise."