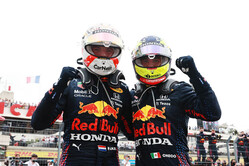 In France you scored a career hattrick in taking your third clean sweep of pole position, race victory and fastest lap. Just how good was last weekend?
Max Verstappen: It was an amazing weekend and it always feels good to get pole position, but to win was a great result. I'm super pleased with that, and we won the race on strategy. I hope now we can keep this up for the rest of the year. Everyone at the track and in the factory is working flat out and now we just need to keep pushing to win more races this year.

Historically, Circuit Paul Ricard has been a weaker track for us so did you expect to be so competitive?
MV: No we didn't as Mercedes have been so strong there in the past but we are seeing that every race weekend is different in terms of competitiveness and you never know where you stand until you're out on track. You never know what the others are capable of so we didn't expect this result which makes it even more satisfying. It was a great team effort from everybody, you can see everyone is working very well together and it's just a great team of people here.

The next race of this triple header is at our home track, the Red Bull Ring. What are you expecting?
MV: I'm really looking forward to Austria because of course it's like a home Grand Prix and the opportunity to have two races makes it even better. It's always nice to race here and we've had good results at the Red Bull Ring but nothing is ever guaranteed. We have to again set up the car well there, read the conditions and react to them. I don't know what the weather will be like but for sure I'm expecting it to be close again. We'll find out when we get there but hopefully we can have two very good weekends.

With third place in France, you scored back to back podiums for the first time in your F1 career. How do you summarise the weekend?
Sergio Perez: It was a positive weekend and it was great for the Team to take a double podium and score valuable points in the constructors championship. On my side I am still making progress and things are coming together but everything is going in the right direction.

As a Team we didn't expect this kind of performance at a track that hasn't suited us in the past.
SP: As a Team we worked really well together in France. We made the strategy work and now we just need to keep it up. It's time to look ahead and it's still very early in the season so we need to keep working hard and treat every race as if it's the last. The motivation from everybody is super high, and we'll take this momentum forward to maximise our potential in the coming races.

Next up is the Styrian Grand Prix and Red Bull's home race...
SP: I'm looking forward to racing for Red Bull at its home Grand Prix and we have two weekends now at the same track which I think will help me a lot in terms of progress and getting more experience in the car. The Team has done well here in the past so hopefully that form continues and we can get some good results.

With third place at the French Grand Prix, Checo scored back to back podium finishes for the first time in his career