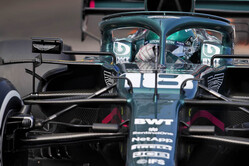 Sebastian: "The goal is to continue our points-scoring form in Austria and maintain our consistency. It's a great circuit to race at because it's such a quick lap but with plenty of high-speed and difficult corners. It feels great when you can hook the car up for a lap. It is always challenging to race at the same circuit back-to-back because the margins become increasingly small the more laps we do, but that makes it exciting."

Lance: "Overall, Paul Ricard was a positive weekend for the team. The car showed great race pace, which enabled me to bounce back from a tough qualifying session. We head to Austria with strong momentum and we're hungry for more."

With three DRS zones (Turns One to Three, Turns Three to Four and Turns 10 to One), there's plenty of overtaking opportunities around a lap of the circuit. In 2020, the first Austrian race had 29 passes after the first lap, before an upswing to 43 the following weekend. A total of 76% of those overtakes were assisted by DRS, underlining its powerful impact.

Overtaking is comparable to Baku. The best opportunities to overtake in Austria come at Turns Three and Four due to the heavy braking point on entry into Turn Three, which can reward late-brakers and offers several angles of attack. With a DRS zone immediately following, the downhill run to Turn Four offers a chance to fight back or power past for position.

Pirelli is splitting its tyre options in Austria. The opening race will use the C2, C3 and C4 mid-range, used last time out in France, before going one step softer for the Austria finale with the C3, C4 and C5. The venue is traditionally low on degradation, so expect a one-stopper to be the standard strategy.

In 2020, there were four Safety Cars across the two races in Austria (three in the opening and one in the second event), but historically there is a 50% chance of a Safety Car in dry Austrian races, and there has only ever been one Virtual Safety Car, back in 2018. A mid-race interruption could potentially turn the race into a two-stopper.

With laps completed in just over a minute, a lap of the Austrian Grand Prix is action-packed from start to finish. With elevation changes, long straights and a sweeping middle sector, keeping the flow and maintaining high speeds is the key to maximising a lap. Our official Cyber Security Partner SentinelOne presents the key technical facts and stats behind a single lap of the track.

Ten corners are completed in under one minute and 10 seconds, highlighting the high-speed nature of the circuit, boosted by three powerful DRS zones and a sweeping downhill slalom to the flag that rewards precision - and punishes over-commitment.

Drivers will arrive at Turn One at speeds well over 300km/h (186mph) for one of the hardest braking points on the circuit, dropping to fourth gear and 140km/h (86mph) for the medium-speed corner.

It's key to get back on the power quickly as drivers move onto the 800m straight, which incorporates the minor flat-out kink of Turn Two, and climb towards Turn Three for one of the best overtaking spots on the track.

Hugging the right-hand side of the circuit, drivers reach 315km/h (195mph) and sweep left to approach a bumpy braking point. The challenge of Turn Three is then increased by the sharp right-angle of the corner. Mistakes are often made, and drivers can end up on the run-off.

Dropping to second gear and speeds of 80km/h (49mph) while navigating a tricky camber change, drivers get back on the power for another long straight downhill into Turn Four.

With the benefit of DRS, drivers clear 300km/h (186mph) before taking on the challenge of braking downhill into a sweeping curve, which begins a high-speed and flowing downhill second and third sector.

Turns Five, Six and Seven are navigated at high speed, with drivers often lifting rather than braking to maintain a higher average speed.

They exit the complex at over 275km/h (170mph), pulling high lateral g-forces, maximising the outside kerb of Turn Eight before a short straight plunges downhill.

Turns Nine and 10 arrive fast: they're back-to-back right-handers where over-aggression can lead to invalidated lap times - or worse - for using the run-off.

It's crucial to take the inside kerb at the final corner so a driver can return to the power swiftly for the start/finish straight.

Expect lap times to get progressively quicker across the two weekends as the track rubbers in. With consistent conditions, lap times should also significantly improve for the Austrian Grand Prix.