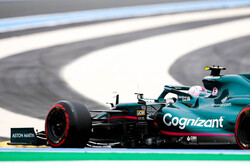 Sebastian Vettel: "We looked strong in Q1 on the soft tyres, but I do not think anybody wanted to start the race on the soft tyres, which is why we ran on the medium tyres in Q2. We believed there was a real chance to make Q3 on the medium, but, for yet unknown reasons, the balance did not feel as good on my last run. The front end was washing out and I could not extract the grip I needed. Maybe I pushed a bit too hard, but we were not far away from making Q3. For tomorrow, we have a free choice of tyres, but all of the top 10 will be on the medium tyres anyway, so it is not easy to vary the strategy. Tomorrow will be about who is best at managing the tyre life and degradation."

Lance Stroll: "It is one of those things. You can never predict when red flags are going to happen, and we were very unlucky to have two in Q1. I also had a lap time deleted, but that lap showed there is good pace in the car. I felt happy with the balance and the progress we have made so far this weekend, so there are positives to take away. It is a shame it is difficult to overtake at Paul Ricard, but you never know. We will keep our fingers crossed for some rain tomorrow, and we will try to push our way up the field from P19 regardless."

Otmar Szafnauer, CEO & Team Principal: "You win some, you lose some, often as a result of a hair's breadth. Sometimes it really is not your fault. Today was one of those days. Lance drove a great lap in Q1, but it was disallowed owing to a small margin of track limits violation that gained him nothing in terms of lap time. Then his chances of recovering were scuppered due to the late red flag, which was outside of his control. Sebastian did well to get through to Q2 but struggled with a lack of front-end grip on his quick lap and ended up P12. As always, both drivers will push as hard as possible for points tomorrow."