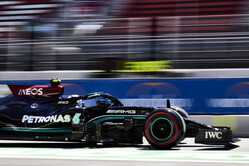 Valtteri Bottas has suggested that it was the overreaction of rivals that led to his grid penalty following Friday's pitlane incident.

At a time the FIA is issuing a technical directive aimed at slowing down pit stops - a facet of the sport at which Red Bull is particularly deft - with an eye on its rival's success in that department, on Friday Mercedes "tried something new".

Unfortunately it didn't work out, and instead of discovering a new means of improving its pit stops, Valtteri Bottas momentarily lost control of his car, spinning as he left his grid slot.

McLaren, whose crew were standing outside the adjacent garage, immediately complained to race director, Michael Masi, and at the subsequent hearing Bottas was handed a three-place grid penalty.

Having qualified second, the Finn will therefore start the Styrian Grand Prix from the third row, and speaking in the moments after qualifying blamed the overreaction of rivals for the penalty.

"My personal view is that it's quite harsh," said Bottas of the penalty.

"I never imagined after that that there would be a penalty," he admitted, "but of course other teams, when they see the opportunity, they complained that it was dangerous etc. so that we would get penalised.

"That's how it goes..." he continued, “everyone is always trying to screw you over in this sport. I mean, yes, it can be a dangerous situation if there's many people in the pit lane but..."

Bottas had previously admitted to being "caught out" in the incident, which saw him attempt to leave his slot in second gear in a bid to reduce wheelspin.

"It definitively caught me out," he said, "I never imagined that would happen on the pit lane. We decided to try something different on the launch and start in second gear, because sometimes with the higher gear and the lower revs you can manage it better, as the wheelspin in the initial part is not so aggressive.

"But once I got the wheelspin it really caught me out, maybe the lines on the pit lane were still slightly damp from the drizzle and I just couldn't hold it.

"Obviously quite a different behaviour in second gear than in first gear. So, that happened."