"It's been really difficult for us," admits Hamilton 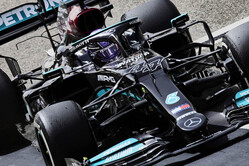 World champion, Lewis Hamilton cites the four races that followed the Azerbaijan GP as being "really difficult" for Mercedes, as he and the team pull together in their efforts to "find the edge" needed to beat Red Bull.

While the Briton, almost to the point of distraction, regularly boasts of the Brackley-based outfit's determination and team work, earlier this week James Allison revealed that Hamilton has been spending more and more time in the simulator as he aims to turn Mercedes flagging championship hopes around.

Asked whether he'd enjoyed his time back in the simulator - an aspect of the sport, much like testing that he is known to loathe - Hamilton replied: "I can't say that I necessarily enjoyed it... particularly after those last difficult races we had, I just went in to see if there's any way I can help the team be better prepared.

"There's been a couple of good things from it," he added, "but not life-changing so I'll continue to work with Anthony (Davidson) and we've got other drivers not here that do a lot of work, so just working on the processes of how we communicate with them in a programme so we're getting the right things tested.

"Overall it's been positive."

"It's been really difficult for us from Monaco, which obviously was a bit of a disaster," he continued, "and then the same for Baku, better at France and better last weekend but they have taken a step ahead of us and so we are just working as hard as we can to see if there's a way we can close that gap.

"But we're not even halfway through the season," he added, "so I am still fighting and chasing for this title.

"I don't really find myself being concerned as such," he insisted. "We are all pushing as much as we can, we would love to have more pace at the moment to be able to really challenge, not only in qualifying but in the race. They're continuing to take steps forward but I can't get tied up and get into that negative bubble of worrying.

"All I do right now is that I am trying to put all the energy into being the best prepared, helping the engineers be best prepared, lots of great conversations and this is the time we come together and we unite and we work as hard as we can to rectify whatever issues we have.

"That's what we do, that's why we're world champions and I have confidence in the team that we can do that."

Asked about the conflicting claims from the team over upgrades, he said: "I knew that we had that upgrade coming... at the end of the day, everyone is working absolutely flat out.

"We are learning more and more about this car, we are discovering where we need to push more and extract more, and I have all the confidence in the team that we will do over the course of time."