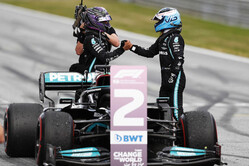 Refusing to give up his quest for the title, Lewis Hamilton admits that the lack of upgrades is costing Mercedes dearly.

Coming just seven days after being soundly beaten in France, Max Verstappen's lights-to-flag victory in the Styrian Grand Prix was clear proof that the table are finally turning, that 'the King is dead, long live the King'.

Though he drove his Mercedes to the limit, Lewis Hamilton was unable to keep pace with his Dutch rival, a scenario he had warned about on Saturday.

"It was a bit of a lonely race really," the world champion subsequently told reporters. "I was trying to keep up with those guys, but the speed they have, they've obviously made some big improvements over the last couple of races and it's impossible to keep up.

"Nonetheless, we got good points as a team today and we just got to keep pushing."

To add to his woes, like most of its rivals, Mercedes has already turned its attention to 2022, and this, combined with the limits imposed by the budget cap mean that updates are in short supply. Indeed, the German team brought nothing new to Austria.

Asked if he feels that Red Bull is concentrating on this year rather than 2022, Hamilton said: "I don't know what's going on with other teams, but I know that of course, from our side, we do improve our car almost every race, which I think is very important, because we have a good opportunity to have a good season and I'm confident with the people we have in the team that also the focus for next year is 100%. So, I think so far I don't see that compromise - but of course time will tell next year if it's like that! Yeah, I fully agree with the approach we have for this season."

When asked if he now accepts that Mercedes will not be able to catch it rival, the world champion replied: "I don't accept anything! I think we've still got many races ahead of us and we've got to keep pushing.

"We're World Champions and that's what we can definitely improve if we have put our minds to it. If we're not going to develop and improve our car for the rest of the year, this is the result you're going to see, because, as I said, they've really eked out performance in these last few races, wherever it's been, whether it's been in France with the engine or the new wing, whichever it is.

"There's another TD (technical directive) coming out for the wings," he added. "I don't know if they're stopping the bendiness or not but maybe that will level the playing field. We will see."

Asked if Mercedes is right to focus on next season and not introduce upgrades this year, Hamilton replied: "I'm not going to question the team's logic and how they got through with their process.

"We're down on a few areas. It's been close at the beginning of the season and if we were both - Red Bull and us - had the same performance as we did in those first four races then perhaps it would be a little more exciting, but as I said, they've taken a decent step forwards but we will work as hard as we can to manoeuvre around it. But in terms of baseline performance this is what we've got. I think we did a decent job today but it's probably going to get harder if Sergio has a better weekend, but we're going to keep pushing.

"Naturally they are just faster, so there's not a lot that I can do in that respect. I've just got to keep trying to do the best job I can each weekend."