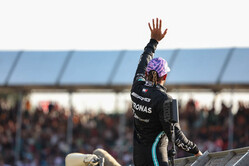 Lewis set the fastest time in Q3 with an impressive lap to ensure he starts tomorrow's inaugural F1 Sprint Race in first position. Valtteri took P3, just two tenths behind, having set his time in clean air on the final run.

Both drivers made strong gains from the day's only Practice session and took to the track in front of the biggest crowd of the year under blue skies at Silverstone.

Today marked the first qualifying session of the new weekend format being trialled by F1, with a 100km sprint race tomorrow setting the order for Sunday's Grand Prix.

Lewis Hamilton: I am so grateful to see everyone here - to come to the Silverstone Grand Prix and have a full crowd and see the energy is amazing. When I was coming into this weekend, I was hopeful that with the great work we have done together in the team, plus the energy of the fans, it would get us there.

Red Bull were very quick in the practice session but we were just staying focused on our job and trying to layer up - I was in the sim this morning as a practice session because it's the first time ever we have had a morning free. I was just putting in the time, trying to give absolutely everything and leave no stone unturned.

We've been working so hard, putting so much effort and time in - at the track, on the sim, in the factory - just trying to stay centred and squeeze every last thing out of this car. It's been such a difficult time for everyone and we finally got all the fans here at the British Grand Prix, and the desire to want to deliver for everyone is beyond belief.

Valtteri Bottas: I think the last lap was really good, I was the first one out in free air with no tow so if I consider that, it was a good lap. As a team we are at the front in the fight which is great to see - Red Bull looked strong in Practice and it was a bit worrying but it's all to play for.

Today was only Qualifying, we have the Sprint Race tomorrow with lots of opportunities and I'm looking forward to it - as a team we'll try to get the best result. It was great to feel the energy and the atmosphere of the crowd today, it's really cool to see the fans here.

Andrew Shovlin: Well done to Lewis on another pole position; they haven't been easy to come by this year but it was a solid job throughout and a relief that his first lap in the final session was enough to secure the top spot. Our morning was focused on learning; there's simply too much work to fit into one hour but we managed to do a decent mix of long run and single lap work. Our single lap pace was uninspiring in Practice but we managed to find a direction to improve grip and balance going into Qualifying which showed in the timesheets. Valtteri's final run was a good lap but compromised by being first car out; we'll review our timing on that as we could have potentially secured the front row had we found him a car in front. Overall, the pace was strong from both cars and that's reassuring given that we've had a tough time in recent qualifying sessions.