"We're miles away from them," admits Hamilton 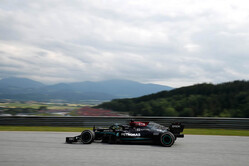 World champion, Lewis Hamilton pins his (eighth) title hopes on much-needed upgrades as he admits Max Verstappen is "walking away with it".

It wasn't quite despondency, but despite Toto Wolff and Lewis Hamilton's insistence that second was theirs - but for some damage to the car - the look of the defeated was obvious.

Whatever way they want to paint it, Hamilton and Mercedes have lost five successive races to their rivals, who appear to get better at every race.

Consequently, despite the mixed messages over upgrades coming out of the team last week, the German team has never needed them more.

"Max is walking away with it right now and there is not really much we can do about it," said the seven-time world champion on Sunday evening.

"They have added so much performance," he continued, "and we have a lot of work to do to try and close that gap.

"I hope our car feels better," he added, looking to his home race at Silverstone. It has been pretty poor here the last two weeks. It has definitely been a painful few races. But we will keep our heads up and keep trying. We will work as much as we can to improve in the next couple of weeks. We have been massively down at this track. It will be interesting to see how it is in the other races to go."

"I am always a sceptical person," said Toto Wolff, "half-empty glass, but I am seeing the positives. We have 13 - 14 races to go. We are one retirement away from Red Bull and we have lost more points than we should have lost to our own mistakes.

"Clearly in Austria the last two races we did not have the performance we must have in order to fight Red Bull," he added, "and we need to get our act together in every single area and hopefully perform better on the other tracks.

"Losing 13 or 14 points is not great but this is still the long game," he insisted. "It is against the odds for us now, and that's clear because they have a performance advantage and you can see that. But all these years I have tried to keep our feet on the ground by not being carried away with performance and now I need to do the opposite.

"So we need to see things optimistically rather than pessimistically like we have done in the past."

Of course, the main reason for the mixed messages last week is down to the massive rules overhaul in 2022, and having already claimed that his team is fully focussed on next season the fact is that when it is not "mathematically possible any more to win this championship", Mercedes will give up entirely on 2021.

Meanwhile, as Red Bull works flat-out on the current season, many are already wondering if this will come back to bite the Austrian outfit next year.

Then again, the Milton Keynes-based outfit might be happy to accept the old adage about it being better to have a bird in the hand...