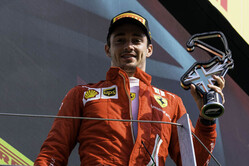 Scuderia Ferrari leaves Silverstone with its head held high. On a track that, on paper, should not have suited the SF21, the team came away with its biggest points haul of the season courtesy of a second place for Charles and a sixth for Carlos.

Charles' first podium of the year, the 13th of his career, came after he led for nearly the entire race, starting from the opening lap, when he made the most of a collision between Verstappen and Hamilton, who had been ahead of him up until then. Charles' pace was very good, especially in the first stint on the Medium tyres, managing a reasonable gap to Hamilton up until the pit stop. The situation changed once he switched to Hards, with Hamilton upping the pace and, with three laps to go, he managed to pass the Ferrari man. Charles was obviously disappointed that the victory had slipped from his grasp with just a few laps to go, but he can still take satisfaction from a truly great performance. That was also the opinion of the fans who made him their "Driver of the Day" with the on-line vote.

Carlos drove a good race and for the second time in two days, he had a great climb up the order. The Spaniard also looked competitive on the Medium tyres, to the extent that he got ahead of Ricciardo by running a longer and faster first stint than the Australian. Unfortunately, a technical problem at the pit stop cost him a lot of time and he found himself once again behind the number 3 car. The Spaniard soon caught up to Ricciardo again, but lacked the top speed to get past, making for a frustrating final part of the race.

The Formula 1 World Championship resumes in a fortnight's time on 1st August with the Hungarian Grand Prix at the Hungaroring, on the outskirts of Budapest.

Charles Leclerc: We have to look at the positives in this type of situation, despite the disappointment of losing the win in the closing laps.

It was a challenging race for me. In the first stint, I had to make some changes on the steering wheel to manage the engine cuts I had. After that, I felt that we had it under control. I managed to pull away from the others and lead for the majority of the race. Unfortunately, Lewis was just more competitive on the Hards. I could feel his pace as he approached me and there was not much I could do.

On the upside, we were quicker than anyone else on the Mediums, which we did not expect. It was impressive. On the Hards, we had a little bit less of an advantage, but still showed a great pace. I am very proud of how we have been working. The team has done an incredible job and fully deserves this podium. They also deserve a win, so we will keep pushing to make it happen if we get the chance.

Carlos Sainz: Not the greatest race for me, but in general a very good result for the team and many positives to take away. Today our car was strong, the balance was good, and our work with the set-up is paying off.

Two good starts put me in a position to fight with Ricciardo, but passing the McLaren on track proved to be incredibly difficult. The dirty air through the corners meant I couldn't get close enough and we were lacking a bit on the straights. Once he pitted, my pace in clean air was super strong and I managed to virtually overcut him before my stop. Unfortunately the pit stop was slow. The team has been great at pit stops all year and these things can happen. I tried my best to overtake the McLaren during the second stint but we faced the same problem and in the end we came home in P6.

A big congrats to Charles, who nearly managed to secure a win for the team! This race gives us a good feeling for Hungary and for the second part of the season. We keep pushing.

Mattia Binotto: This was a positive Grand Prix for us, not just because of the result, but mainly because of the progress the team has made. After the race in France the whole group reacted well. We know we are not yet at the point to be fighting for the top places on a regular basis, as there are two cars that are faster than ours. But it's important that we are working in the right direction.

Charles drove a fantastic race, following on from excellent performances on Friday and Saturday. I can understand his disappointment because it hurts to lose a win in the closing moments of a race, but he should be pleased with what he achieved over these three days. Carlos drove a solid race. It was a shame that a technical problem with a wheel gun at the pit stop cost him at least one place. Now we are looking ahead to the next race in Hungary. It's a very different type of track to this one and we will be looking to confirm the progress seen over the past few races.