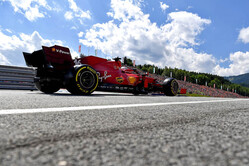 For the first time this season, neither Scuderia Ferrari driver managed to get through to the final part of qualifying. Come the end of Q2 for the Austrian Grand Prix, Carlos Sainz had to settle for 11th, missing the cut by only six thousandths of a second, while Charles Leclerc was just 47 thousandths away and qualified 12th. Balancing out the natural disappointment is the fact that both drivers get a free choice of tyres for the first stint, which might play an important role in terms of strategy and prove significant when the points are awarded - the final verdict of this ninth round of the season is only handed out when the chequered flag is waved.

Carlos Sainz: Today we decided to take a bit more of a risk by trying to make it into Q3 using the Medium tyre. After a decent first attempt with that tyre, we went for it and unfortunately missed the cut by only 6 thousandths of a second. I'm obviously not happy with that because it was extremely close and we couldn't show the good progress we've made this week.

These past few days, we worked hard on the balance, the set up and my driving style and we could have had a good Q3. Anyway, the race is tomorrow and our goal is to have another strong Sunday here in Austria and score as many points as possible.

Charles Leclerc: Mixed feelings after today's qualifying. On the one hand, we were aware of the risk of not making it into Q3, prioritising setting our fastest Q2 lap on the Medium compound to suit our strategy. The lap itself was quite good. Unfortunately, some of our competitors finished ahead of us on the same compound, which is the disappointing side of it.

Our race pace has been solid this weekend and we have a free choice of tyres for the start. We have to analyse exactly which strategy is the best for tomorrow, considering that there are quite a few cars ahead of us, some of which are starting on Mediums. This makes things a bit more tricky, as our advantage has slightly lessened. We will give everything and make the best of it tomorrow.

Laurent Mekies, Racing Director: Of course we cannot be happy given that we didn't get either of our drivers through to Q3, but more than ever, today's qualifying result has to be looked at in terms of the race. Starting where we are, we can choose which tyre compound we start on, which should give us an advantage over those ahead of us who are on the Softs.

That is why we tried to make the cut into Q3 on the Mediums, which we missed out on by a very small margin at the end of a session in which nine drivers were covered by less than two tenths, several of them running the softest compound. Now we are concentrating on preparing for the race in which strategy and the behaviour of the various tyre compounds will play a key role.