"It's probably my best performance in F1," says Leclerc 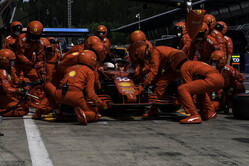 Charles Leclerc was one of several drivers who drove their heart out on Sunday afternoon, even though the Monegasque finished exactly where he started.

Starting seventh, though a podium finish was never on the cards, Charles Leclerc at least hoped for a decent points haul.

Unfortunately a first corner clash with Pierre Gasly resulted in front wing damage that necessitated an unscheduled early pit stop that saw the Ferrari driver return to the fray in 18th.

Keeping his head down, the youngster got on with the job in hand, and slowly began to work his way back through the field, eventually finishing seventh - exactly where he'd started - one place behind his teammate, Carlos Sainz.

However, rather than focussing on the negatives, Leclerc was buoyant, insisting that it was his best performance of his F1 career.

"If we look at the first lap, it's been an incredible race for us and we've been incredibly quick," he subsequently told reporters.

"Obviously there's the first lap that basically stopped us from doing something much, much better today," he admitted.

"It was a big opportunity, the pace was incredible," he continued. "It's probably one of my best performances in Formula 1 today apart from the lap 1. But it's life."

Asked who he felt was to blame for the clash with Gasly that saw the Frenchman also drop down the field where he was involved in further incidents with Nicholas Latifi and Antonio Giovinazzi, Leclerc opted not to make judgement until he had seen a replay, though the stewards had already deemed it a racing incident.

"I'm really looking forward to next weekend," he grinned. "Obviously today, again it was really special, it's been a long time that we didn't have this type of race pace. So it was good to see."