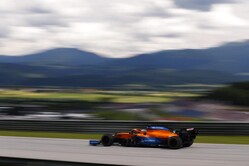 Heartbreak for Daniel Ricciardo in the Styrian Grand Prix as a power glitch undoes all the great work he did on the opening lap.

A strong start saw the Australian up to ninth by the end of the opening lap of the Styrian Grand Prix having started from 13th.

However, on lap 7, he suddenly developed a loss of power which dropped him back through the field again.

Though he fought desperately to regain those positions, such was the competition in the midfield that he was never in a position to make up the places lost, for while he subsequently found himself running seventh, having been the last driver to make a scheduled stop, he slipped back down the order.

"It was an awesome start, awesome first lap," he told Sky Sports, "and it put ourselves in such a strong position ahead of a lot of our quicker rivals, and on a medium, so we were sitting pretty.

"But all of a sudden I lost power," he continued, "so every position and more that I gained, I basically just waved them on through.

"We were able to fix it on track, it was a control issue, so we were able to get it, but by then it was too late and then I'm back in the mess that I did well to get out of on the first lap. Then you're in traffic and you're in a train and then... honestly, the rest of the race is over after that.

"It's disheartening," he sighed, "because I had such a great start, and I was on a preferred strategy with the mediums. It felt like the cars ahead would have struggled on the softs and we were in a really good position, thirteenth to ninth, it was all there ahead of us.

"We could've been fifth and sixth again as a team," he he added. "When it is low it is really low, this sport. This was one of those days that I really did not love it."

Of course, the Australian's cause wasn't helped by a qualifying session that left him mystified, the McLaren driver starting the race from 13th, exactly where he finished.

He revealed that overnight analysis on Saturday had helmed him discover where he had been losing out.

"I definitely got some clarity on some areas that we kind of missed out on," he said. "I would comfortably say 50% that we are on top of.

"There is still a bit more to understand," he admitted, "but I also think there is a bit with set up as well.

"I'm optimistic going into next week that it will be alright," he insisted. "So I was fairly comfortable and today I put yesterday behind me, and I was very ready for the start. It showed with another strong first lap but as soon as I lost power… anyway, onwards."

Asked about the loss of power, team boss, Andreas Seidl said: "We need to wait now for the analysis that we do together with our colleagues from Mercedes.

"It has nothing to do with the temperature," he added. "There was a control issue on the power unit side which affected the power delivery for half a lap.

"Daniel could recover them with some steering wheel switches, but due to that he lost four positions and then we're stuck in traffic and the race was pretty much over."