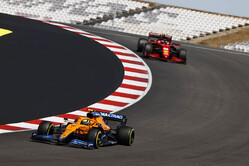 McLaren's Lando Norris believes that people are underestimating Ferrari, and that the Maranello outfit's 2021 contender is one of the best out there.

Almost since the start of the season, McLaren and Ferrari have been locked in battle for 'best of the rest' title, and while the Italian team's long-standing issue with front tyre wear continues, meaning that it has struggled at some circuits, Lando Norris believes that people are underestimating the Maranello outfit.

Currently fourth in the standings with 108 points, Ferrari comes off the back of a season in which it finished sixth with 131 points.

"I do I feel like a lot of people underestimate them for some reason and still think they have a terrible car and don't expect things," said Norris.

"Ferrari made a lot of improvements from last season," he continued. "They're one of the best cars in in certain types of corners and they're extremely fast. There's nowhere where they're particularly bad; they're decent on the straights, they're still very fast in the corners. I think people should just expect more from them.

"They're a little bit up and down," he admitted, "but it's not that they're in trouble every race. I think Paul Ricard was particularly bad for them. But a lot of the tracks will suit them more than us.

"Considering how much they struggle on the straights still, on the GPS they're one of the best in the corners, similar to Mercedes and Red Bull in a lot of the corners. So they're our big threat at the moment.

"We're still working hard, that's why we're not taking anything for granted at the moment. And we still have to keep chipping away and improving the car, because once they put it all together they can easily be ahead of us. It's tough."

The Briton, currently fourth in the driver standings, is particularly impressed with the SF21's single-lap pace.

"Most of the time they've out-qualified us this year already, and they've been on pole two times. So, it shows they have a very good car, and as soon as they sort their problems in the race, then they're flying.

"It's not a surprise to the team that Ferrari, after the issues they were facing last year, is coming back strong," he admitted. "That's something we never underestimated and simply a good reference for us. It shows us where we stand, and it just shows us that we simply have to keep working hard in order to continue our journey towards the front again in Formula 1.

"To battle a team like Ferrari is not something we feel bad about, this motivation for everyone within the team to keep working hard in order to get to a point in the future to beat them, and not just Ferrari but also the other teams that are in front of us."