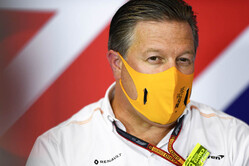 A question to both of you. The British Grand Prix next month is going to take place in front of a capacity crowd. Home race for both of your teams. Can we get your thoughts on that please?
Zak Brown: I think it's very exciting that we are going back racing again with crowds. We have missed the fans. I think the fans have missed us. I think Formula 1 has done an excellent job of bringing the sport to them through various forms of media. I think the UK Government has recognised they've done an excellent job with vaccinations and as they start to roll out events I hope other grands prix follow shortly, which I think will be the case.

Otmar Szafnauer: Also very good for Formula 1 as well as Silverstone and the grand prix and the UK. We look forward to welcoming fans back and also, like Zak said, this is the first of many where we will have capacity crowds.

A one for both of you again, another calendar question of sorts. It was announced earlier today that Turkey is going to replace Singapore at the beginning of October. I'd love to get your thoughts on that as well. Maybe we can start with you Otmar, as you must have very good memories of Turkey from last year?
OS: Yeah, well, if it rains again and we have similar conditions and we put it on pole and race well it would be great. But we're not counting on that. It's great to have Turkey back, it's a good track and a replacement for Singapore and I hope the rest of the calendar can remain so we get 23 races in.

ZB: Yeah, I think it's great. Stefano and everyone at the Formula 1 and the FIA have done an excellent job putting on grands prix ever since COVID started and they've done it in a very safe and responsible way and I think that's what has allowed us to get to as many grands prix as we have. I think COVID certainly isn't behind us and we have various issues in various parts of the world and I think Stefano has Plan A, Plan B and Plan C with the full intent of getting 23 grand prix put on this year. Unfortunately we are missing Singapore but Turkey is an exciting race and I'm very confident of getting in a full calendar this year.

Zak, if we can stay with you now, I'd like to start by talking about drivers. Lando has now scored in 12 consecutive races and he's the only driver to have scored points in every race this year. Can you tell us how Lando has grown this year, as a driver, as a person and within the team?
ZB: He's doing an awesome job and he's done really an awesome job since his rookie season. He continues to show tremendous speed, a lot of maturity, racecraft, he knows when to take risks and when not to. He's been excellent in qualifying and he just continues to mature. He's young, he's 21 but drives with a lot of maturity and is doing an excellent job and hopefully it will continue. I'm sure it will.

Has the step that he's taken this year surprised you in any way?
ZB: No, not really. I think it's surprised some others but we've always known he's extremely quick. I think Carlos is showing how quick he was as a team-mate. They were evenly matched and so I'm not surprised but I'm pleased he's doing what we thought he would do.

Daniel has less than half of the points of Lando so far this year but he seemed very bullish after his race in France. Are we about to see him back to his best? How confident are you?
ZB: Yeah, I'm very confident. I think he's very close. You need to remember this year we had less testing. We were the only team that had to do an engine change, so with the less testing we had to do some more development on the car, as opposed to letting him get stuck right into it, so I think he's settled in, he's working extremely hard, he's happy, we're happy, great environment inside the team, so I think we're not far away from seeing Daniel at his best.

And it's been a very close fight with Ferrari this year yet you did pull away from them in France, you're now 16 points clear of them in the Constructors' championship, so who are you battling now? Do you think you can catch Red Bull or is it still very much a fight with Ferrari?
ZB: No, I think Red Bull's out of reach this year. We need to be realistic. I think when you look at the last race, while we're battling Ferrari today, Alpine certainly showed a lot of speed, AlphaTauri again this morning , so I think the season is not yet a third over and people, the development pace in Formula 1 is quite fast so I think while we're maybe looking at Ferrari today on the timetables, I think you've got to pay attention to everyone. Things can swing pretty quickly in this sport.

Otmar, coming to you: let's talk drivers first of all as well. Sebastian Vettel seems back on form, he's only three points short of his 2020 total already and he's scored in the last three races. When you look at the opening seven races of the season, where did it begin to click for him? Is there one moment that you can pinpoint?
OS: I think it was a progression for Seb. He was incrementally getting better and feeling more comfortable with the car. He's very experienced, so going into Monaco he knew exactly what had to be done there. Qualifying is a premium there as we all know so he focused on that early on and had a good qualifying session, good race and then from there on, with every race, he gets more comfortable in the car. He's been comfortable with the team from the beginning and I think he'll get stronger yet with time and races.

Lance has run him pretty close in qualifying and the races; where have you seen Lance Stroll step up this year?
OS: Well, Lance is much more confident in himself. He's driving really well, drives really well on a Sunday, a bit unlucky sometimes on Saturday, just like last weekend, but he's done really well race-wise and again, good race craft. He's fast, good race pace and I expect the two of them to regularly score points for us.

And can we talk tech now? You announced yesterday a technical restructure of your team then today we learn of Dan Fallows coming your way from Red Bull Racing. Can you just tell us more? First of all, why the need to change the structure?
OS: Well, traditionally we've been probably the smallest team and for us to be able to compete with the teams that are winning World Championships, we know we have to grow and in order to do so, the organisation will have to change and restructure so we've done that with growth in mind and we've moved Andy Green up to Chief Technical Officer which was announced yesterday, who'll have three direct reports so he can focus more on strategic issues and we're helped by Red Bull announcing that Dan will be joining us as Technical Director.

And are there going to be other senior roles that you're looking to create or is this now it?
OS: Well, so underneath Andy Green there will three direct reports, Dan being one of them, Luca the other and Tom McCullough who is here as Performance Director is the third but underneath them there are other roles that we're recruiting for, for sure, and on the operations side, too, we're growing there so watch this space, there will be further announcements.

(Andrew Benson - BBC Sport) Otmar, why did you not announce Dan Fallows before Red Bull did and secondly, Christian Horner's just told us that he won't be joining for at least the next two years. Is that your understanding of the situation as well?
OS: Well, we announced yesterday the re-structuring and we were going to announce Dan in due course but we don't control what Red Bull do and I'm grateful that they announced Dan. He's a great addition to our team, he's a likeminded individual, he's a high performer, he's won World Championships, he knows Seb, so we look forward to Dan joining. The start time? We're still working on that.

(Edd Straw - The Race) Otmar, how difficult is it, with the amount of recruitment you're doing, to get the right bodies through the door in good time, because obviously contracts being what they are, it's not a short term process, is it? These are years lead times to get people in and then integrated so with the ambition of a team, how difficult is it when you've got a situation with Fallows where it could still be as much as a couple of years based on what Christian Horner said to actually get the effect you want from your recruitment?
OS: Yeah, it's a marathon, not a sprint so I think the important thing is that we get the right people. You'd rather have the right people in your team as opposed to getting somebody very quickly but it doesn't work out, so the process is to identify likeminded individuals that are high performing and get them into the team and then if we have to wait a little bit, that's the process.