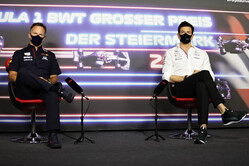 Question to both of you to start with. We've had a thrilling start to the season with some great on-track battles between your teams. What can we expect here this weekend? Who's the hunter, who's the hunted?
Christian Horner: I think the races have been fantastic this year. Every race has been very tight between the two teams and so there's no reason to think this weekend will be any different. I suppose the only variable that we have potentially over the weekend is the weather. As we've seen previously, sometimes when the weather does arrive here it happens in a big fashion. That's going to be another thing to navigate. I think the racing's been fantastic this year and it's been tight and close and we've certainly enjoyed it so far.

Do you think you're on the front foot after last weekend?
CH: I think last weekend was a very strong weekend for us. Tactically we got it right. You could see that there's very little between the two cars, particularly on a Sunday afternoon. So, it's just about getting those marginal gains and getting the set-up right, reading the tyres correctly, reading the weather, getting the strategy right. So, it's going to be about ticking all of those boxes and doing the basics well.

Toto, hunter? Hunted?
Toto Wolff: I think hunter, definitely. I think we were good in France but we got it wrong with how the race panned-out. We could have been more active. In terms of race speed, we were good. It's going to swing. It's going to swing both directions, I believe, depending on the circuit. France should have been more to our advantage, Austria less, but having said that, the championship is long. There are at least 15 races to go. It will be about who can make the least mistakes. Who can optimise the strategy and collect points. DNFs can play a role but certainly at the moment, we're hunting.

Toto, you said after the race on Sunday that you gambled and you lost. Why do you feel the need to gamble?
TW: I didn't mean it in the way of gambling. I'm not a gambler, I don't like to bet on something that I'm not in control of - but there's two Red Bulls now that are in the window and Checo was perfect because he was just in the right window that, if we would have pitted, he was right there. He stayed out. And, we were racing between our two guys, for all the right reasons, I believe, but when you're having a competitor that's as good as Red Bull this year, you've just got to plan and execute in the best possible way for the team.

In terms of the planning, can you give us some insight into what's gone on at the factory this week? What lessons have been learned from Sunday and how much input have the drivers had?
TW: The drivers played an important role. They did lots of laps in the simulator and we're still experimenting with the set-up. You can get it right and then you land on Friday and the car drives or you can get it wrong. Obviously that gives an advantage of how fast your development curve or performance curve is over the weekend. So, they were part of it - but still, it's learning in progress and that's what any team should do, even if you've won the Championship seven times in a row.

Christian, how significant was Sunday's race at Paul Ricard, in terms of your performance relative to Mercedes?
CH: I think it was a massive performance for us because we've seen Mercedes have been so strong there the last few times we've been at the circuit. I think Lewis had led every single lap bar one. So, to get the pole position first of all was a huge thing, and then in the race, obviously it didn't get off to a great start, with a strong wind on Sunday afternoon, with Max dropping behind Lewis initially - but we managed to get back into the lead by getting the undercut at the first stop. And then, of course, you're in a very difficult position where you're leading the race and the options and the risk is that it's easier to take that risk when you're following. So, to take the risk when you're in the lead, give us track position and make the pit call. It's something we did in Brazil a couple of years ago and we chose to do it again in Paul Ricard. And it worked out. It obviously went down to the end. Lewis did an amazing job of keeping his tyres alive the last few laps. Thankfully there were just enough laps for Max to catch and make the pass. Phenomenal win on a day where we probably didn't have the fastest race car of the two teams - but tactically and operationally we were sharp and we capitalised on that. To get Checo up there on the podium for a double podium as well, by exploiting an optimal one-stop, worked well for us. So, it was a big result and it was a good way to start this intense part of the Championship with the first of the triple-headers.

And do you agree with Toto that you should be even stronger here, given the layout of the Red Bull Ring?
CH: Not really, I don't see why. I think this circuit is likely to be very close. Again, we got off to a good start in FP1 but you can see the Mercedes is right there. It's going to be about getting it right over a single lap and then getting the race and the strategy and reading the weather conditions correctly. It's such small margins, there's quite often less than a tenth, session-to-session, qualifying-to-qualifying, race-to-race. It's incredibly tight. That's what makes it exciting. I think that's what's motivated everybody within the team, within the factory and definitely the buzz walking into the factory on Monday morning, you just feel that energy.

You mentioned the role that Checo played last weekend. What options does he give you that weren't there previously?
CH: Well, he played that role perfectly last weekend because he was an alternative strategy to Max, and he was close enough and competitive enough obviously to make it work. They didn't have the luxury of pitting into free air. The way the two drivers are cooperating and working with each other, that's teamwork. He played the team game very well and it worked out for both of them.

Checo gives you options. Have you taken up your option on him for next year?
CH: It's still early days, we're only at race seven. He's doing a super job, the whole team's very happy with him and at the relevant time we'll sit down and have that conversation. He's doing a great job. You can see he's getting more and more comfortable in the team.

Toto, while we're talking driver contracts, Lewis mentioned yesterday that you've started contract talks for next year. How hungry is he to carry on?
TW: Very hungry. It's a very new situation for him, that it is so tight in the battle with another team and another driver and I see him in very good spirits.

Christian, it's just been announced that Dan Fallows, your head of aero is leaving the team and going to Aston Martin. Where does that leave you in what is a very important stage of the development of the 2022 car?
CH: Well, it's been known about for some time and it's... all credit to Dan to be selected to be their technical director. He's been with the team for 15 years, he's a great guy and been a valued member of our team but of course we have tremendous strength of depth in the aero department led under Adrian's tutelage. We've got some tremendous talent and it just frees up an opportunity for the next evolution - but Dan's going to be with us for a while. He's fully focused on this year's car and will be with us until the end of his contract.

So, promote from within - is that the plan?
CH: Yeah, very much so.

(Julien Billiotte - AutoHebdo) Two-fold question about the new FIA technical directive regarding the pit stop. Christian, since Red Bull has been superb in that field, do you feel targeted? Will you have to have some changes?
CH: Well the technical directive is certainly very wordy and you'd almost have to question whether it's a change of regulation. I suppose we have been very competitive, we've got the world record on pit stops, we've had the majority of fastest stops during the year and it's not by accident. I find it a little disappointing... I mean it's the duty of the competitor to ensure that the car is safe and the penalty for a wheel not being fixed is that you have to stop the car immediately, so it's a brutal punishment if you haven't got all four wheels securely and safely fastened. So, what the technical directive is trying to achieve, I'm not quite sure, because I think there's an awful lot of complexity to it. Of course, when you're in a competitive situation, if you can't be beaten then obviously the most logical thing is for your competitors to try to slow you down, and that's obviously what's happening here.