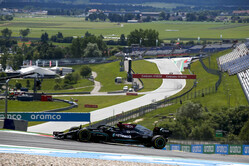 Lewis finished the first session of the day third quickest with Valtteri just behind in P4. Lewis took P4 in the second session, after having the quickest time of the session deleted for a track limit violation.

Valtteri finished the second session in P12 after encountering traffic on his fastest lap - and focused primarily on long runs on the soft and hard tyres.

Lewis Hamilton: Overall, a work in progress - it's been a beautiful day, a few drops of rain at the start of the second session but the track is awesome. We're a little bit down, particularly over a single lap, but generally the car felt relatively solid. I'm happy with where we've got the car to, I've been working hard all week trying to figure out where I want the car and I hope the hard work starts paying off soon. Red Bull are throwing some good punches at the moment so we've just got to have our guard up and make sure we're ready for the return.

Valtteri Bottas: FP1 felt overall a bit better but in FP2, we had just one run with lower fuel and that was a little messy so the lap time on the board was nothing amazing. But the focus for today was on the long runs, trying to find the long run performance - we prioritised that well today and hopefully that will pay off on Sunday. Lewis and I were running quite different set-ups so we have lots to analyse tonight to find the best bits to take into qualifying and the race.

Andrew Shovlin: It's been a productive day for us and a lot drier than we'd expected from the forecast. The drivers were fairly happy with the car throughout the day; the first session was odd as we looked off the pace but the balance of the car wasn't far off where we expected it to be. There were a few tweaks to the setup going into the afternoon and encouragingly, our pace looked a bit better both on single lap and long run, although it could have been a mixture of conditions coming towards us and improving the car. It's a tricky circuit to set the car up for as the track warp in the slow speed corners makes it difficult to find a consistent balance and on such a short lap, any mistake can be very costly. However, we've got some good direction from today and can no doubt make further steps forward. The forecast remains unsettled so there's every chance we'll still get some wet running.