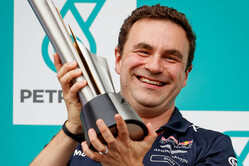 Though Aston Martin has yet to make an announcement it is understood that Red Bull's former aero boss, Dan Fallows is joining the British team as technical director.

Moments after the end of FP1, Red Bull revealed that Fallows was to "spread his wings", the Austrian outfit confirming that the Briton is to join Aston Martin.

"We can confirm that our Head of Aerodynamics, Dan Fallows, will be joining Aston Martin as Technical Director," said the Austrian outfit, "and we would like to take this opportunity to thank him for his dedication and accomplishments throughout his 15-year career with the team.

"Dan joined Red Bull Racing in 2006 as Team Leader in our aerodynamics department, helping the team to its first podiums, victories and world titles," the statement continued. "In 2014 Dan was promoted to Head of Aerodynamics, helping shape the team's progress through Formula One's hybrid era and its rise to renewed competitiveness.

"It goes without saying that Dan will be missed," said Christian Horner, "as he has played an important role during his time at Red Bull Racing and I would like to thank him for his contribution towards the team's successes.

"We do however recognise that the chance to take on the role of Technical Director within a Formula One team is an appealing next step in his career," he added. "In turn, this move creates exciting internal progression opportunities as we look to the future and draw from the wealth of talent within the wider team."

"Fallows will not be departing Red Bull until the conclusion of his contract and remains fully focused on building upon the positive start we have made to the 2021 season," the team added.

Beginning his career with Lola, Fallows subsequently joined Jaguar as senior aerodynamicist. Following a ten-year stint with Dallara as chief aerodynamicist, he joined Red Bull in 2006.