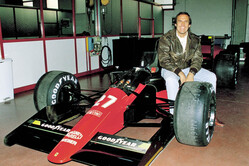 12 time Grand Prix winner, Carlos Reutemann has passed away at the age of 79.

Between 1972 and 1982, the Argentine raced for Brabham, Ferrari, Lotus and Williams. Over the course of those ten seasons he scored 45 podium finishes, with 6 pole positions and 4 fastest laps.

Signed by Brabham owner, Bernie Ecclestone, to partner Graham Hill in 1972, in his maiden Grand Prix - his home race in Buenos Aires - he put his car on pole, a feat only achieved by two other drivers in the history of F1, Mario Andretti and Jacques Villeneuve.

Retained by Brabham for 1973, Reutemann also made his debut with Ferrari, partnering Australian Tim Schencken in the 312P sports prototype at a number of rounds of the World Endurance Championship.

1974 saw Reutemann score three wins in the Gordon Murray designed BT44 on his way to finishing sixth in the championship. A year later, though only scoring one win - albeit at the mighty Nurburgring - he finished third in the standings courtesy of his overall consistency over the course of the season.

1976 saw Brabham switch from the Ford Cosworth to the Alfa Romeo Flat-12 (sigh), however the unreliability of the Italian engine saw Reutemann fail to finish 9 of the 12 races he entered. Indeed his only point-scoring finish was fourth in Spain.

At the Italian Grand Prix he was recruited by Ferrari as replacement for Niki Lauda, who was still recovering following his horrific crash at the Nurburgring.

Against all odds, Lauda declared himself fit enough to race at Monza, consequently Ferrari ran three cars. Finishing ninth, Reutemann opted to sit out the three remaining races of the season.

For 1977, the rugged Latin was brought in by Ferrari to replace Clay Regazzoni, the Italian team opting for a fire and ice partnership with Lauda.

Despite initially appearing to have the upper hand, Reutemann was soon put in his place by Lauda as the Austrian went on to win the second of his titles. The Argentine ending the season fourth overall.

1978 saw Lauda head to Brabham, while Reutemann, who remained at Maranello, was partnered with a young Canadian, Gilles Villeneuve.

It was a difficult season for the Argentine for the Lotus wasn't the car it once was, and in an Alonso-style case of irony, Jody Scheckter won the title in the Ferrari Reutemann had vacated.

After just one season with Lotus, Reutemann moved on to Williams where he once again found himself in a competitive car. In partnership with Alan Jones, who went on to win the title, Reutemann gave the British team its first ever Constructors' Championship.

The following season, following a 'disagreement' with Jones in Brazil, the relationship between the two soured badly, so much so that at the season finale in Las Vegas, the Australian vowed to give his teammate - who was leading the championship by one point from Nelson Piquet - any assistance.

Starting from pole, Reutemann was passed by Jones at the start, the Australian refusing to yield. The Argentine was subsequently passed by a number of drivers his cause further hampered by a gearbox issue. At race end he was 8th, while Piquet, who finished 5th, was world champion.

Staying with Williams in 1982, he had contested the opening two rounds in South Africa and Brazil when the Falklands War erupted.

As the situation between Argentina and Britain deteriorated, Reutemann opted to quit and while some say that his decision was influenced by his ambition to enter politics, Patrick Head insisted that the driver had simply given up because his heart was no longer in it.

Though he walked away from F1, in 1985 he participated in the Argentine Rally with Peugeot.

Finishing third, for three decades until Kimi Raikkonen's 8th place in the 2010 Jordan Rally, Reutemann was the only driver to score points in both the Formula One and World Rally championships.

His racing career at an end, Reutemann did indeed go into politics, and was elected governor of Santa Fe. Though widely seen as a prospective president, he opted not to run for the country's highest office.

When one thinks of Argentine racers, it is natural to recall the legendary five-time world champion, Juan Manuel Fangio.

However, with his rugged looks and fiery temperament, Carlos not only typified the look of the 70s racer, he had the raw talent, and in the eyes of many had the ability to have won at least one title.

In 1991 Reutemann returned to Maranello and tried out the cockpit of Jean Alesi's 412 T1, while in December 2004, he completed around 20 laps of Fiorano in Rubens Barrichello's F2004.

Enzo Ferrari held Reutemann in high regard, nevertheless, in his book, Piloti, che gente..., Ferrari did not hold back: "An athletic highly skilled driver, with a tormented and torturous temperament. Able to resolve difficult situations and to make up for mechanical shortcomings, but sometimes his emotions got the better of him and lost him the result that seemed possible at the start."

Reutemann was hospitalised in May this year after suffering an intestinal haemorrhage. While it was initially thought his condition had improved and he was released from hospital, it actually worsened and he returned to hospital in June. On Wednesday his daughter Cora announced his passing on social media.

"Dad left in peace and dignity after fighting like a champion with a strong and noble heart that accompanied him to the end," she wrote.

"I am proud and blessed for the father I had," she added. "I know that he will accompany me every day of my life until we meet again in the house of the Lord."

To his family and friends, Pitpass and its readers send their deepest condolences.