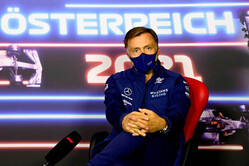 Jost, can we start with you. Very painful for George last weekend - but also very encouraging, because the pace was good, wasn't it?
Jost Capito: Yeah, it's both. Of course it was disappointing not finishing the race but to see the pace during qualifying and during the race was quite encouraging, yes, absolutely right.

George's mantra in the press conference yesterday was very much 'what doesn't break you, makes you stronger'. So, how's the team bounced back this week? What's the mood?
JC: It's a different weekend but I think last weekend was encouraging to go into this weekend. We made the tyres work very well last weekend and I think some other teams will catch-up with that and look at that data and be better this weekend as well. It will be a new challenge. We're in a positive mood towards this weekend.

Tell us a little bit more about the tyres this weekend. We've got the softer compounds here, the C5 is here. Did you do much running with that tyre in FP1?
JC: Nicky did one set of the test tyres. Now we are just after the session so I don't know the data yet but we'll see.

You mentioned Nicholas. He said yesterday that he's not thinking about 2022 yet. When are you going to make a call on his future?
JC: On the drivers' side we've got time at the moment. We will announce when we can announce the drivers but we're not in a rush at the moment.

Just tell us about Nicky's strengths. What's impressed you about him since you've been at the team?
JC: I think his dedication and his will to get better. How he practices and how he approaches the races, how he approaches the season is really impressive. He had his rookie season last year and that was big for a rookie, a very difficult season last year for a rookie with all the COVID restrictions, new tracks and everything different than normal. Obviously this year he improves a lot in his second season. His confidence level is quite high and his race speed is very impressive. He is working still on getting better results from qualifying but he was very close to Q2 last weekend and let's see what he can do. I'm sure he can still improve during the season.

Just a word of what's going on back at the factory? Is it all towards 2022 now or is the team in a state of limbo? Because you've had all of these structural changes recently - is it all geared towards next year or will we start seeing the fruits of the labour this season?
JC: Mainly, we're working on next year's car. So, that didn't change and that was before we did the changes and it's still the same now. So still, when we tried something obvious on this year's car, of course we improve it but structural changes are not just for one car and not for the other. I think we are working differently right now and that has an impact on this season as well. I think part of the performance we've got right now is based on the structural changes and on the different kind of work we are doing and the different kinds of cooperation within the various departments.

Is that mainly operational at the track, is that what's changed?
JC: No, it's in general. It's cooperation between the track team and the home team that changed, mainly. And that's something that you feel immediately. There is a better communication.

Guenther, one of the topics that came out of yesterday's press conference was Nikita having a heavier car than Mick. Can you just explain to us how one car can be heavier than the other?
Guenther Steiner: It's in the tolerances. It's pretty easy to explain. You always try to do your best and one of the chassis is a little bit heavier but not in all circumstances - just when we need a certain weight balance, so it ends up a little bit heavier. It's marginal - but it is heavier.

Can you give us any numbers? How much heavier?
GS: No, I don't want to get into numbers - because then we are quoted on numbers and then we go and discuss numbers - because they can vary depending on the racetrack, and the racing because, as I said with the weight balance we need to achieve.

Heavy enough to have an impact on lap time or tyre wear?
GS: Absolutely, it also has an impact. Heavier cannot have no impact. It's physics. Again, the next thing you ask me is how much impact? Give me a time! I'm not going to go into there because then we start to speculate because it's not one fixed number.

On the topic of Nikita. Can you just explain something that I think happened yesterday. He gave you a door. What's the story behind that?
GS: Apparently, in Russia, if you get a present, you need to give a present back. So, we gave him the present of the Mazespin, of this game, so his present back was the door. The door was a present because of last year, or two years ago, because of what happened with Kevin and... with Kevin - Romain was not involved in that one, he was the good guy this time, Romain. So, what happened with Kevin two years ago, so he thought I needed a new door.

A reinforced door! Now, we're back at the same racetrack as last weekend. Can you tell us how much of a good thing that is for your drivers - because it's all about learning Formula 1, so coming back to the same place, is that a good thing?
GS: Absolutely. I think at least they have got more data to look at, to learn what they did last weekend, how can we get something out of it and then re-test it here, which you can use it always as a test session because we stay at the same track. Obviously we change tyres, I know that, but some of the tyres stay the same, and the temperatures have changed but in general I don't think it's a bad thing for us, it's a good thing when you stay at the same race track and can go again.

And what about the blue flags. Let's look ahead to this weekend's race. Nikita in particular was very interesting yesterday, talking about the impact of blue flags on his races and back at Monaco I think he said he had 35 blue flags during the race, so he could never settle. What advice, what can you do to help the drivers in that situation?
GS: It's very difficult. On the short tracks like this and Monte Carlo, when you have a car like us that's pretty slow, you get these blue flags and the only way you can try to help is with the strategy, which we did last weekend. We tried to get him out of the first round of blue flags. He couldn't avoid the second one, the second train unfortunately, so, as he explained, once you get one or two, you're just so slow you can never recoup the tyre back to a performing state, so you just fall into the trap of all the blue flags that are coming. It seems like, all the other guys, they were in a train as well, somebody was in front and they didn't let anybody past and he got just caught-up there and then you're tyres are working and then you're just out there sliding around. Mick got a little bit luckier with his strategy and he could stay in front of, I think it was Ocon which was fighting with Leclerc a little bit, so they stayed away, so he just got a few blue flags in the closing laps of the race. It is difficult. Especially these short tracks. They are terrible. I mean, I feel for them, but whenever you see them and watch them it's like 'whoa, here we go again'.

(Dieter Rencken - Racing Lines) Question for Guenther. About the Nikita chassis situation. Could you confirm that you've actually swapped chassis between the drivers. So, Mick has actually driven this 'so-called' heavier chassis as well. I believe at one or two races. And then also, could you confirm that it's heavier because this particular car was a carryover from last year - I believe driven by Kevin Magnussen and therefore it suffered various damages which had been repaired and therefore it's a bit heavier than a brand new car?
GS: It seems like you know more about our chassis than I do Dieter! The chassis, I think it's a tolerance and obviously we carried all the chassis over from last year, just to clarify that. Like a lot of other teams did because of the freezing of the car. The car is not a complete new-build. It is in the tolerance when you build a car. Car #1 has got tolerance prepreg so there is something in there and for sure over a year you do some repair jobs and maybe it got a little bit heavier there. And, back to your first question, which I almost forgot, I don't remember. We swap the chassis around quite a bit and we always did so I don't exactly know who's driven which chassis when and where - but I think both drivers have driven all of our chassis.