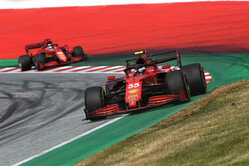 Scuderia Ferrari came away from the Austrian Grand Prix with a further 14 points, courtesy of a fifth place for Carlos Sainz and an eighth for Charles Leclerc. The result was down to teamwork, the two drivers working together in the closing stages to secure fifth place, which on paper looked like the best result available given the performance of the SF21 at this track. The overall result could definitely have been better, but for a couple of incidents when Charles was forced off the track by another driver, which led to penalties being imposed by the stewards.

The team went for different tyre choices for the start for the two drivers, opting for the Hard for Carlos to give him the longest first stint possible, while Charles was put on Mediums. As the race evolved, it showed that the strategy chosen for yesterday's qualifying was the right one, given that all those who started ahead of the Ferrari drivers on the Softs, finished the race behind them.

Carlos Sainz: I'm leaving Austria feeling confident about the work we are doing weekend after weekend. Today we executed a smooth race with a good strategy, great tyre management and teamwork. We chose to start on Hards, which we knew would make us struggle in the first few laps. That cost me a couple of positions at the start due to the lack of grip but I knew my race was not about lap 1.

The target was to extend the first stint as much as possible and I managed to maintain a very solid pace saving my tyres. I actually went very long before stopping for the Mediums and from there it was flat out until the chequered flag. I caught up quickly to the cars ahead after passing Yuki (Tsunoda) and then thanks to our teamwork with Charles and a good overtake on Daniel (Ricciardo) I managed to cross the line less than 10 seconds behind Checo (Perez) for P5. We've had two good Sundays here in Austria but we are still far from where we want to be. The ambition and motivation is high, so we'll keep pushing hard to improve for the upcoming races.

Charles Leclerc: It was a frustrating race for me, as I felt I could have got an even better result. Splitting the strategy between me and Carlos paid off for the team in the end. I was struggling to fight my way ahead of Daniel on the Hards in the closing laps of the race and so I let Carlos by to give it a shot, which worked out well for us. Anytime I saw a gap I tried to take the opportunity. There were two close ones with Checo and I think he knows he was a little bit over the limit.

We have already spoken and cleared the air and, in the end, it's all part of the game. A 5th and 8th place is not what we want, but I think that we did a solid job today. We've been working extremely hard, and every step forward is important. We have to stay consistent and continue like this and hopefully we can confirm out strong race pace in the next few races.

Mattia Binotto: This result is in line with our potential at this track. Fifth place was on the cards and the most we could aspire to. Carlos secured it with a great drive, while Charles definitely deserved better.

I think the decisions we made yesterday were shown to be the right ones, given how the race went. What I would highlight today is the spirit shown by our drivers, as Charles did not hesitate to make way for Carlos, who was on fresher and faster tyres. That meant we were able to get the best possible result for the team. It's the right spirit and it's the way to go as we continue to make progress.