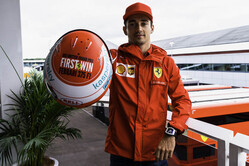 Charles Leclerc and Carlos Sainz will start from fourth and ninth on the grid in tomorrow's Sprint Qualifying that gets underway tomorrow at 16.30 local (17.30 CET), the result of which decides the grid for the 72nd British Grand Prix to count towards the Formula 1 World Championship.

It was a good qualifying for Scuderia Ferrari with both its cars making it through to the final phase, on a track that is very demanding for car and driver. As has usually been the case this season, the midfield was closely contested down to the nearest thousandth of a second. That can be seen from the fact there is less than two tenths separating Charles and Carlos, but four other cars split the two SF21s on the time sheet. Leclerc was quickest of those behind the two teams leading the championship. Carlos is not that much further back and in tomorrow's Sprint Qualifying, run over 17 laps equivalent to around 100 kilometres, he can aim at moving up the order on the grid for Sunday's Grand Prix.

Charles Leclerc: I'm very happy with today's result. Going into qualifying with so little preparation makes things a bit more tricky, but also exciting. We did a good job in maximizing the potential of our car. Overall, I felt confident, especially in Q1. In Q2, I was not at the level that I wanted to be, but I regained my confidence and pace for the final session, finishing in P4. I think it was the best result we could have hoped for.

In terms of expectations for tomorrow, we have to wait and see. We are all heading into an unknown - to battle it out in the first Sprint Qualifying in Formula 1. We will use FP2 to prepare as well as we can, and give it our all to bring home the best possible result.

Carlos Sainz: I'm not fully satisfied with this quali. I had a good feeling with the car from the start of the session, building confidence every lap up to Q2, where I put together a strong lap time to make it into Q3. In the very last attempt however, I struggled a bit more and a couple of small mistakes here and there meant I couldn't match that lap from Q2, losing a tenth or so that unfortunately today was very costly, as it was extremely tight. It is a pity, because the car had the pace and the lap time was there.

The Sprint Qualifying gives us a good opportunity to push tomorrow, though. Time to focus on that. The weekend is far from over yet and I will give it my all until the end.

Laurent Mekies: A good qualifying for us on the very demanding Silverstone track. There was a very close fight throughout the session for those behind the top three. In Q3, the smallest of gaps meant the difference between being on the second or fifth rows and our drivers finished at either end of this group of six drivers.

Charles did a very good job all day and fourth place was a nice reward. A shame for Carlos who had the speed to be a bit further up the grid for tomorrow.

We had prepared carefully for this weekend, the first with the new format and I think we saw the fruits of our efforts. We know that here more than ever, race pace is more important than performance over a single lap and that on a track like this, it is the most difficult challenge facing us. Now we must concentrate on the second round, namely Sprint Qualifying, which presents new challenges to the teams and drivers. We will have to do a good job and make the most of the second free practice to be as well prepared for this major new element of the weekend, without forgetting that the Grand Prix is on Sunday.