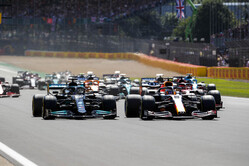 Let's face it the Sprint is here to stay.

After all, it's got its own logo and even a theme tune, so who are we to argue. And if that doesn't convince you, the drivers and teams all appeared to love it while much of the media thinks it to be the best thing since... well, sliced bread.

So enthused was Ross Brawn that he said he would have been willing to pay the price of admission to see Fernando Alonso's opening lap alone.

It was indeed a great start from the Spaniard, but Ross has been around the sport long enough to have witnessed dozens of other great starts, we've even had a few this season.

Then there was that "sensational nail-biting" first lap... hopefully, just to shut the F1 MD up once and for all we can see Sergio Perez start from the pitlane, overtake a whole load of cars on the opening lap and ultimately barge his way past his teammate, all whilst giving a helpful tow to Lewis Hamilton and they cross the line in the sport's first ever dead heat.

To make it even more of a "sensational nail-biting" race how about a Jody Scheckter Silverstone '73-style incident that eliminates the main contenders - not Lewis, natch! - leaving just the seven time champ, Lando and George to fight it out, as F1, unlike football, finally comes home.

If nothing else, yesterday's Sprint has given Hamilton advance warning of the cards Max previously held up his sleeve, and the Mercedes driver will be determined not to lose out to the Dutchman twice on successive days.

Then again, that will go for Valtteri also, who made a great start but found his teammate blocking his path, thereby negating any advantage the Finn might have had courtesy of those red-banded tyres his car sported.

Whether 'Nando can repeat yesterday's "sensational nail-biting" start remains to be seen, however, once again the drivers have a free choice in terms of the tyres they start on.

The big problem facing Max is that his teammate will start from the pitlane after Red Bull changed his rear wing assembly, made changes to the setup of the suspension and to the cooling of the front brakes, all of which means that once again the championship leader will be under attack from two Mercedes and with no support. Then again, that was the scenario yesterday, and young Max didn't appear to suffer.

As ever, the midfield battle is where it will be happening, and in the opening stages it will be about the McLarens seeking to deal with Leclerc, whose teammate starts from further back following his tussle with George.

Like Lewis, Lando is clearly buoyed by the home support, while Daniel is looking a lot more comfortable this weekend. Charles has looked strong all weekend, but whether he can hold off the two Woking chargers remains to be seen.

Sadly, his penalty moves George from 9th to 12th, but he should still be able to mix it with the likes of Fernando, Seb, Esteban, Carlos and Pierre, certainly in the early stages.

Lance and Yuki both start comparatively out-of-position so it remains to be seen how quickly - or even if - they can make progress, while the main source of interest, at least as far as the rear end of the field is concerned will be Sergio.

It's highly likely to be a one-stopper, however it remains to be seen whether drivers will start on the medium then move to hard, or softs and then switch to the hards earlier, though starting on the medium offers more flexibility in terms of pit stop timing and requires less tyre management.

With more freedom in the tyre choice, the opposite could come into play also, starting on a harder tyre before switching to a softer compound.

In yesterday's heat - and it is even hotter today - drivers complained of blistering, so we can expect that to be an issue again today. Ferrari suffered the worst of it, but so too did Lewis and Max... and that was on the mediums.

With the Weather Gods sitting this weekend out, barring the divine intervention of a former priest or disgruntled employee, today's race is likely to be decided by three factors; the start, strategy and tyre wear and despite all the hoo-ha, all that "sensational nail-biting" stuff yesterday, today is likely to end with the same three drivers on the podium.

The pitlane opens and the drivers head out, Norris leading the way.

On the grid, Michael Douglas - of whom we need a Covid, 2021 version of Falling Down - greets Tom Cruise, who appears to be attending just about everything these days.

All are starting on mediums bar Perez who is on hards. Verstappen, Leclerc, Norris, Ricciardo and Alonso are on fresh mediums, while the Mercedes pair are on used mediums.

Bottas is warned of a tailwind into Turn 9, that's along the straight into Copse.

They're away! Brilliant starts from Verstappen and Hamilton, the Briton getting off the line much quicker than yesterday. Verstappen has the line in Turn 1, but Hamilton almost has him in Village, then getting a better exit from Aintree.

Side by side on the Wellington Straight they touch, and while Hamilton is on the inside at Brooklands, Verstappen holds his line on the outside.

Through Woodcote, Hamilton gets the tow and as they head down the straight towards Copse they are side-by-side. As they turn in for Copse they touch, the left-front of the Mercedes clipping the rear-right of Verstappen's, the Red Bull spins and slides across the gravel backwards and into the barriers.

The safety car is deployed.

Verstappen climbs from his car, the youngster clearly winded, and needing time to recover.

Although Mercedes is waiting for Hamilton he doesn't pit.

The race is red-flagged in order that the stricken Red Bull can be cleared from a part of the track notorious for incidents.

First observations are that it was a racing incident, nothing more. Uncompromising stuff from both drivers, but surely this is what we want.

"Is Max okay," asks Hamilton, who now has a golden opportunity to close the title gap.

The stewards are to investigate the incident.

In the meantime, Christian Horner lays the blame squarely at the door of Hamilton, saying the Briton was 100% to blame.

Unnoticed in all the excitement is the fact that before the red flag, Raikkonen had made up four places and was running 9th, while Stroll hade made up three and Sainz two.

As the stricken Red Bull is lifted on to a flat-bed truck, the entire right side of the car is wrecked, especially the rear corner,

Ahead of the re-start, one has to wonder exactly what damage Hamilton picked-up in that clash.

"Thank God he walked away," says Christian Horner, "he's in the Medical Centre but he walked in there himself.

"For me it's very clear, Lewis has stuck a wheel in at one of the fastest corners on this calendar. He knows you don't do that."