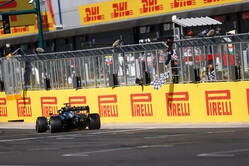 Mercedes driver Lewis Hamilton was the winner, with two tyre changes, of a dramatic British Grand Prix that was paused by a red flag shortly after the start following contact between Hamilton and Red Bull driver Max Verstappen. Hamilton started on P Zero Yellow medium C2, changed to another set of mediums during the red flag period after lap two, and then finished the race on the P Zero White hard C1. Ferrari's Charles Leclerc, who finished second, led until the final laps before being overhauled by Hamilton who was fighting back from a 10-second penalty.

The same basic strategy was used by all the drivers apart from AlphaTauri's Pierre Gasly (who made an extra stop following a puncture) and Red Bull's Sergio Perez.

Under the red flag rules, teams are allowed to change tyres and repair damage. In total, 13 drivers changed tyres (including Hamilton): but they just swapped the mediums they had originally started the race on for a fresh set of the same compound.

The sprint qualifying format for the British Grand Prix meant that drivers had a free choice of tyres for the start. They all chose to start on the medium C2 tyre, with Perez - who started from the pit lane - being the only car to start on the hard C1.

Temperatures remain high throughout the race, with 32 degrees centigrade ambient and 49 degrees on track. Despite these challenging conditions, the tyres performed well.

Mario Isola: "The race strategy was influenced by the new tyre rules in place for sprint qualifying races, which allow all the drivers a free choice of tyres at the start so that they can follow the theoretically fastest run plans. That's exactly what they did today, with the vast majority moving from the medium to hard. We were then treated to a fantastic duel between two of the top drivers in the sport, who managed their tyres perfectly to deliver a thrilling battle to the end. Now we remain at Silverstone to focus on our next task: continuing the 2022 18-inch test programme, which we will be doing on Tuesday and Wednesday with Aston Martin, Haas and Red Bull."