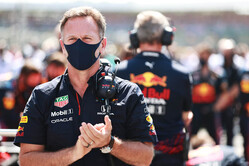 Sergio Perez: "I'm very disappointed with my weekend and my performance. I wasn't able to make as much progress as expected and found myself in a very difficult position with the tyres. As soon as we were in the DRS train it was impossible to overtake people. I think P7 was possible today, with a couple more laps I think I could have got Lance and Fernando but in the end for strategic reasons we decided to stop to take the fastest lap. It's a weekend for us to forget and we lost a lot of ground in the Championship, we need to regroup, work hard and come back as strong as possible in Hungary. I need to re-watch the incident with Max and Lewis as I haven't seen it, but the most important thing that Max is okay."

Christian Horner: "This is an incredibly difficult way to end the British Grand Prix weekend and it goes without saying that we are all just thankful Max was able to walk away from the car, despite later being taken to hospital for precautionary checks, where he currently remains for observation.

"I have reviewed the footage many times and still cannot help but feel that putting a wheel up the inside at Copse, one of the fastest corners in this World Championship, was ill-judged and a huge risk by Lewis to both drivers. He was not significantly alongside Max as you can see from the point of contact, Lewis' front left to Max's right rear. The move was never on and resulted in a 51G impact for Max. We are in contact with Max and Jos and will provide an update later today.

"For Checo, it was also not an easy afternoon and after starting from the pit lane and making early progress through the field he was stuck in a mid-field DRS train creating high tyre degradation. We therefore opted to pit him towards the end of the race in order to secure fastest lap. We come away with a slim lead in both Championships and you can be sure that once we have had time to reflect on today, all this weekend will do is add fire to our Championship fight."