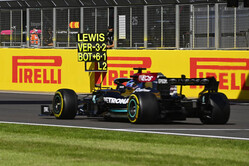 "Pleased" with the sport's first Sprint weekend, which was adjudged to have been a success, Ross Brawn says F1 will reflect on the format over the coming weeks.

Are we alone in finding it somewhat ironic that media coverage following Sunday's controversial British Grand Prix contained no reference whatsoever to the much-hyped new format trialled that weekend.

Of course, a first-lap clash involving the two title contenders which sees one crash into the tyre barriers in an impact measured at over 50G is going to grab the headlines, but of the new format there was no mention.

On Saturday, F1 motorsport boss, Ross Brawn claimed to have been so thrilled by Fernando Alonso's opening lap that he would have been willing to buy a ticket for that alone.

"That first lap or so was completely nail-biting, sensational," he enthused. "Then we had the little duels in the rest of the race.

"Fernando Alonso's performance today was another sensational part of the race," he added. "He got my vote for the highlight of the race... I'd buy a ticket for that every day."

Fast forward 24-hours and even Fernando's lap paled in comparison to the Hamilton/Verstappen scrap, which really was about racing drivers being racing drivers.

Fact is, in many ways the Sprint Qualifying didn't appear to make much difference, indeed the only driver truly out of position on Sunday was Sergio Perez who was retired on the penultimate laps of Saturday's Sprint.

What did come out of the whole Sprint weekend was that change is needed.

Despite having only one hour in which to prepare for Sprint Qualifying the teams managed perfectly, indeed Saturday's practice session was all about fuel loads and longer runs instead of the usual preparation for qualifying, and came across as pretty uneventful, which all seems part of F1's long-held desire to reduce race weekends to two days.

One positive to have come from it is that the racing clearly benefitted from drivers being given a free tyre choice, instead of the current ridiculous rule whereby they have to start on the tyres used in Q2.

This is an area that puts the onus on the driver and his team, one where they can emerge as a hero or zero.

While the opening lap of the Sprint was good - though nothing like what followed 24-hours later - the 'race' soon became a procession, especially as those drivers who had gambled on softs began to regret their decision.

However, the aspect that must be causing sleepless nights for the likes of Christian Horner and Toto Wolff right now is what if what happened on Saturday had happened the previous afternoon.

With Max Verstappen hospitalised until late on Sunday, should the accident have been on Saturday would he have been allowed to race next day.

Though careful to avoid using the word 'race', the Sprint is exactly that, and while Ross Brawn may have found it "nail-biting" and "sensational" will teams be willing to risk it all for three points and a laurel garland and the possibility of their driver having to miss the main event.

Doing our utmost not to pour cold water on the concept, the fact is that it didn't appear to make much difference and in many ways simply complicated things.

The lack of set-up time didn't appear to be an issue, while the free tyre choice added some much needed spice, but one gets the feeling that F1 is doing what it does best, smoke and mirrors, as the sport anticipates two day weekends.

"We'll go away and reflect on the format in the next week or two," says Brawn in his latest debrief for the official F1 website. "I'm sure there will be things we can pick up with teams and then digest the feedback.

"It's a great first step in this experiment, with two more Sprints to come," he adds, referring to Monza and one other even yet to be confirmed.

"I want to emphasise that we won't make a judgment on whether it will be part of our championship in the future until we have done all three Sprints on three different tracks."

Thing is, if Max is even half as motived as we think he's going to be in Hungary and beyond, those Saturday Sprints are going to need to be even more "sensational" and "nail-biting", and the hearts of those fans of a certain age might not be able to take it.