"I gave all of me, but it wasn't enough," says Leclerc 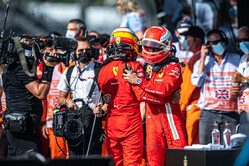 Losing the lead just three laps from the end of an eventful British Grand Prix, Charles Leclerc says he gave all he could.

The first lap incident aside, as Lewis Hamilton reeled in Charles Leclerc in the final stages of the British Grand Prix it was reminiscent of another remorseless multi-world champion, Michael Schumacher.

Though keen to console his beaten foe at race end, whilst hunting down his prey there could be no sentiment, no remorse, only the sweet taste of victory.

Though he essentially lucked into a lead which he maintained for much of the race, there is no arguing that Leclerc gave a good account of himself, and in the process no doubt won over many new fans.

Speaking after the race the youngster admitted that he gave all he could but that ultimately it wasn't enough.

"I gave all of me but it was just not enough in the last two laps," he told reporters. "It was fun, but the car lacked just a little bit of pace towards the end.

"We have been fighting for the win which was incredible," he added. "Especially on the medium we were extremely quick. Then on the hards we lacked a little bit of pace compared to the Mercedes, but overall it was much stronger than we are used to.

"We definitely didn't expect it," he admitted, when asked if he had gone into the race expecting to pull of a surprise victory. "We expected after qualifying to be quite competitive but not as competitive as now.

"The team is doing incredibly well and I am very proud of the team," he added. "It's great to have these types of races, it cheers everyone up.

"There is a lot of work being done, and this shows we are doing something right and that we are working in the right direction, so we need to keep going like this.

"It won't be a smooth ride until we get back to the top but we will give everything."