"We were robbed," says Brawn 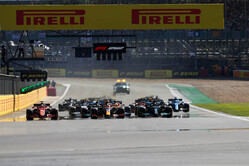 Ross Brawn's latest debrief for the official F1 website naturally refers to the weekend's biggest talking point - and we don't mean the Sprint.

The Briton, who oversaw all of Michael Schumacher seven titles, which involved a number of high-profile incidents, admits that the first lap clash which saw Max Verstappen head off into the tyre barriers with an impact said to be around 50G, robbed fans of a fantastic battle.

"We saw the title protagonists go wheel-to-wheel once again, but this time it ended in a collision, which ended Max’s race. It was a massive relief to see him climb out of the car and walk away before he went to hospital for precautionary checks.

"As is always the case in these matters, there will be a wide range of opinions on the rights and wrongs," he adds in a masterpiece of understatement. "What is clear is that we were robbed of a thrilling battle and nobody wants the championship decided on crashes and penalties, and, as in this case, there was a serious risk to either driver.

"It is something both drivers will reflect on. I hope we can avoid those incidents in the future because I think we were denied a fantastic battle. They raced each other hard for half a lap, and it was thrilling.

"Imagine how dramatic the Grand Prix would have been if that had been the whole race," concludes the Briton.

Sadly, the incident, and its subsequent fall-out, encouraged a certain type of person to crawl from under their rock to post comments and images of a racist nature on social media, leading to F1, the FIA and the teams issuing a statement condemning the comments.

Thankfully, the media have avoided using the word 'fan' when referring to the comments for these people aren't fans. Fans are the people that lined the Silverstone track in extreme heat cheering every twist and turn of that nine corner battle and who continued to cheer the seven-time world champion throughout the race right up to the moment he ended Charles Leclerc's dream.

These people, and their counterparts watching events unfold on screens around the world are the real fans, while those posting their vile comments on social media are simply attention-seeking scum keen to jump on a bandwagon to which the mainstream media insists on giving oxygen.