Masi: Stewards job not to judge consequences of penalties 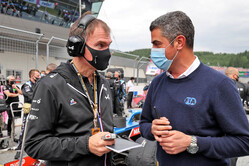 As the furore following yesterday's controversial clash continues, race director, Michael Masi insists that in investigating incidents it is not the stewards job to judge the consequences of the penalties they award not to explain their decision to the public in detail.

While - as Christian Horner, Helmut Marko and no doubt Max Verstappen himself will tell you - yesterday's elimination just nine corners into the race meant that Lewis Hamilton was able to take a huge chunk out of the Dutchman's title lead, it is the seemingly lenient penalty meted out to the Briton that further frustrates.

Though awarded a 10s penalty, the seven-time world champion served this at his pit stop and subsequently went on to win the race.

In the opinion of the Red Bull camp, Hamilton was adjudged to have been guilty of the incident - officially failing to avoid contact - yet was still able to win the race such was the seeming leniency of his punishment.

After the race, race director, Michael Masi was keen to make clear that the stewards look at each incident individually and judge it on merit and are not concerned with the consequences of their verdict.

In other words, they were judging the incident as it was and not in the context of two drivers battling for the title or the fact that a 10s penalty might leave the guilty party free to go on to win while his rival was sidelined.

"It's one of the big parts that's been a mainstay for many, many years," said the Australian. "And this came through discussions prior to my time between all of the teams, the FIA and F1, and the team principals were all quite adamant, is that you should not consider the consequences in an incident.

"So when they judge an incident they judge the incident itself, and the merits of the incident, not what happens afterwards as a consequence. And that's been something that the stewards have done for many years and have been advised to do from top down. I'm talking team involvement, and so forth.

"So that's the way that the stewards judge it, because (when they) start taking consequences into account, there's so many variables, rather than judging the incident itself on its merits."

Helmut Marko demanded a race suspension for Hamilton, and while this is somewhat over the top, many feel - especially as he was deemed 'guilty' - that Hamilton got off relatively lightly, driver tuned pundit Martin Brundle admitting that this was the second most lenient penalty the stewards could award.

"If you look at it on that basis you'll never find a penalty that will address an imbalance like that," said Masi. "If you look at it in that particular circumstance, so that is why going back a few years the teams, or team principals, made a clear distinction that they didn't want consequences taken into account they wanted it based on the incident itself.

"I completely understand that perspective and I think that is a general held view across all stewarding, to not look at consequences for that purpose."

The Australian also made clear that he does not feel the stewards need to account for their decisions in to the public in any great detail.

"You've got a lot of TV analysts out there with a lot of very experienced former drivers out there that will put a perspective forward," he said. "And the stewards look at absolutely everything that they've got available.

"Unlike a VAR process that's sort of done and dusted within 30 seconds, sometimes maybe a minute maximum, the stewards very much are told that you take the time that you need to analyse any possible element of any incident that occurs.

"So I don't see it from that point of view, I think the stewards need to remain as an independent judiciary. And I don't think they should, in their capacity, have any pressures, and they should take their time to analyse everything based on its merits."