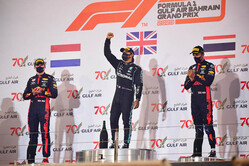 Alex well done, a smile behind the mask there. It's been a tough weekend after that crash in FP2 but these guys standing behind me you can see they're getting behind you and your second podium in Formula 1.
Alex Albon: Yeah, there was obviously a bit of luck involved with Sergio, he had a really good race. But considering Friday, the guys did an amazing job to get the car ready and it just feels good. Feels good obviously, a double podium for us. Yeah, I'm happy.

What's the plan for the next three days? You have some time to re-set and then we're back here on a different track, but that's a confidence boost and that lifts you?
AA: Yeah, I mean I felt like the last three races have been getting better and better but the results just haven't been showing. It's a step forward again. I'll spend the three days doing whatever, hanging by the swimming pool, playing some golf. Yeah, all good.

Max, a pretty solid day at the office. First, I want to touch on what happened at the start. Not nice scenes to happen but thankfully Romain's walked away from that crash.
Max Verstappen: Yeah, it was scary, because we saw a red flag. The doesn't mean it's immediately a bad thing but I saw a lot of fire and I was like 'that's not a good thing'. Luckily, he is OK and hopefully he will recover fast again.

And obviously the fight to Lewis, where exactly was that? You could see just a little bit of pace missing today.
MV: Yeah, we were just lacking a bit. I tried to keep it close, but they always had an answer and besides that also, we weren't aggressive enough with the strategy and then we had a slow pit stop. It is what it is and second is not bad.

And next week, is that track layout going to suit you a bit better?
MV: Normally not, with the amount of extra straight which is coming in. We'll see. The car seems to work quite well around here, so hopefully we can find a little bit more pace through the corners which I left on the other track and then we'll see again.

Lewis, congratulations. Firstly, what we should touch on is how much the FIA, the GPDA put safety first into this sport. And having seen Romain... I've seen all the drivers looking at the screen, before you got back in the car to go back out and do that race.
Lewis Hamilton: Yeah, it was such a shocking image to see. The thing is, you know Paul, when we arrive, when I get in the car I know that I am taking a risk. I respect the dangers that are in this sport. I posted about it whilst I was in that break. It was horrifying, His car, the cockpit... I don't know what Gs he pulled. I'm just so grateful that the Halo worked. I'm grateful that the barrier didn't slice his head off. It could have been so much worse. It is a reminder to us and hopefully to the people that are watching at home that this is a dangerous sport. That is why we are out there pushing to the limit and playing with that limit. But you also have to respect it. As I said, I think shows the amazing job that Formula 1 has done, the FIA have done over time to able to walk away from that. But of course that will be investigated and they will do a lot of work to make sure that doesn't happen again.

The reaction has been quite incredible when you see it outside the car when the race was going on, with the world, how that's done. But then textbook performance by you Lewis, seven-time world champion, you went on and dominated the race. It did look easy from outside but you said at the end of the race that it was quite hard. Was Max pushing you all the way?
LH: Yeah, it really was physically demanding. I think with the break we had at the beginning you get into a mind set and you go out and get a good start and then that 45 to an hour wait that we had it is so easy to step out of the zone. So that was quite tricky but then getting back in, they had a lot of speed today. I was flat out the whole way trying to keep them at bay. It's physical. This track has always been physical. You've got lots of high-speed corners, so I was definitely feeling it. I managed to just about reply to him when I needed to. But I was sliding around a lot out there and I wasn't really sure how it would play out at the end, so I'm massively grateful and thankful to my team because at the end of the day they did a great job with the strategy and what a privilege it is to be able to get another result like this.

Lewis, many congratulations on your 95th win and you are now a four-time winner here in Bahrain. It's been an emotional rollercoaster this evening, given Romain Grosjean's accident. Please can you just try to sum it for us?
LH: We just had to do it downstairs seven times already, so I don't want to regurgitate what I had said downstairs. Naturally, it was terrifying to see. I haven't seen something like that for a long, long time. It really hits home for a driver, because I think while we are all competing with each other and want to beat each other we definitely I would think want safety for everyone and worry about one another when there is an issue, when there is a crash. I'm really grateful that he is safe and was able to get out. But it is a real stark reminder just how dangerous this sport can be - the speeds that we are travelling, the energy that we are carrying when we are travelling at those speeds. The FIA have done an amazing job, but we can't stop where we are, we've got to keep on trying to improve. That's what also makes this sport great. We are constantly evolving. It is still a dangerous sport. I'm sure there are people who tuned in who have never seen something like that and it just shows that those things can happen. I think we are aware of that as racing drivers, the risks we take. Now everyone else is.

When there is a one and half-hour delay like that, what are you thinking about, and how hard is it to get back into the zone?
LH: It's definitely not... I'm sure it's different for each and every one of us. You think about the fact that if everyone else is shocked just imagine how his family is feeling. And then again we're putting our helmets on and we're going back out there. Anything can happen with these cars. It definitely wasn't easy to get back into the zone, into race mode, but the race goes and that's what we've got to do. Head down, otherwise this guy is going to beat me and he very nearly did today.

Well, let's talk about the race a little bit too. Fabulous starts from you. Just talk us through it.
LH: Yeah, the starts were... the first start was really great and when you get a start like that you always hope that you can just keep going - but then obviously the Safety Car came out, or the red flag came out. And then to go back into it, we were behind the Safety Car and it was quite slow. The Safety Car was driving really slow - not really quite sure what happened, so our tyres would have been at a lower temperature, and so it was definitely a slightly different second start - but the second start was also spot-on. After that it was generally trying to build a gap to Max but he had great pace, so in the early stages it definitely wasn't particularly easy to do that. I think because he was following me, his tyres would have overheated sooner than mine, and I was able to bridge a little bit of a gap. Then after that he had the two Hard tyres and it was really quite difficult to maintain the speed that he had, the Medium tyre particularly in that middle stint. At the end, we were both on the Hard but he still also had really good pace and I was just trying to manage the tyres, which I struggled with, I think today compared - so it seems - perhaps them, and perhaps Max. A good battle, and also it was physical out there. I think it's always been a physical circuit and even though it's cooler, you still have those gee through the corners.

Max, coming to you. Lewis says it was a good battle. How pleased were you with your pace today?
MV: It wasn't bad. I think we were trying to keep the pressure on, y'know, but I think we didn't do a good job with the strategy today. We had the tyres to be more aggressive and we didn't do it. First stop we should have pulled Lewis in, instead of Lewis pulling me in. so, I don't know what was going on there. And then, yeah, of course, I had the Hard tyre, and then after that first stop... I think it was the right tyre to be on because initially I gained a bit back on Lewis, of course because he was just bringing his tyres up to temperature a bit slower. With the Harder compound you can push a bit harder on them initially, and then you just lose out, with that 1.5-2 seconds you lose over a lap, stopping a lap later and, of course then my second stop wasn't good. I don't know exactly what happened there but we'll look into that - so then you are even further behind but we were always like four seconds behind and with whatever we did wrong today, that's just very costly. I don't think we had the better pace but we could have done a better job with putting them a bit more under pressure and, yeah, we didn't do it. And, of course, I stopped another time, of course, for the fastest lap, is great but basically after the red flag and the Safety Car the three-stop was a no-go and we still did it, so I don't really get the point of that. Yeah. We'll look into it. Second, of course, is still OK but I think in the way we were second today it wasn't very satisfying. I would have liked to have been a bit more aggressive. And then, our course, if it fails being aggressive, so be it. I have nothing to lose. Even if we would fail I would still be second. So, there's nothing... I don't get why we were so conservative.