Grosjean to remain in hospital overnight 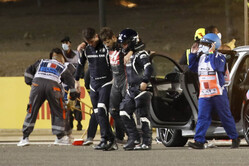 "I just spoke with him on the phone, he's in a clear state of mind, he's good," the Italian told Sky Sports. "He's staying in the hospital overnight, they want to keep him there.

"He told me, and not the doctor, he feels good, it seems nothing is broken," he added. "He's got his hands bandaged from the burns, but otherwise he said he has no burns or nothing. He was very upbeat, I would say, so I'm very happy.

"His physio was in contact with his wife straight away," he revealed. "They know each other very well, so he was in contact and they gave her the news. I tried to call, but you can imagine these people are so busy. When I called him before, he was on the telephone with his son, I was told, so that's good. I think it's all under control."

Amidst speculation the Frenchman may not be fit enough to take part in next weekend's Sakhir Grand Prix, Steiner said that now is not the time to think about such matters.

"Knowing him, he wants to be back," he said, "but we'll see tomorrow when they take the bandages off because he has no idea what they look like.

"For me at the moment, the only good thing is, nothing bad happened. For sure it wasn't good, but he's safe, he's healthy. The rest we'll see tomorrow when we speak with the doctors.

"Following medical evaluation by doctors at the Bahrain Defence Force (BDF) Hospital, Romain will remain in hospital overnight to be treated for burns sustained on the back of both hands after his opening lap incident at the Grand Prix," it read. "All X-rays performed on Grosjean came back clear of fractures."