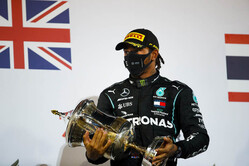 The race had to be restarted after more than an hour's delay for barrier repairs following a massive accident for Haas driver Romain Grosjean, from which he thankfully emerged with only minor injuries.

After the re-start (which counted from lap three) the top nine were all on the medium tyre, with AlphaTauri's Pierre Gasly the highest-placed driver on hard in 10th.

There was a safety car after the re-start. This had the effect of lengthening the stints - also considering the relatively cool temperatures of 25 degrees ambient and 26 degrees on track - by reducing thermal degradation as well as wear.

Hamilton won the race from pole with a two-stop strategy, re-starting on the same P Zero Yellow medium tyres as he had on the original grid, switching to used mediums once more after 19 laps, and finishing with a 22-lap stint on the P Zero White hard. He took the chequered flag under the safety car.

The three compounds selected for this year were one step softer than those seen in Bahrain last year, contributing to a higher than usual number of pit stops.

Mario Isola: "First and obviously foremost, we're just relieved that Romain Grosjean seems to have only minor injuries after the massive accident on the opening lap. Everything else that happened today is irrelevant in comparison, and it speaks so much about modern safety standards that this accident was survivable. In terms of the race, strategies were obviously influenced by the lengthy interruptions, with the delayed race taking place later in the evening. This meant that the soft tyre performed more strongly than anticipated, as Carlos Sainz showed in his first stint after the re-start, while the medium tyre stints could be extended too. This was demonstrated by Hamilton, who completed two quite long stints on it before finishing on the hard. Throughout the race, we saw a variety of different strategies, with Gasly stopping twice for two sets of hard tyres on his way to P6, for example."