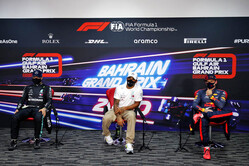 Max, a very familiar qualifying position for you. It did look at one point like you were really putting Valtteri under pressure for that front row. Did you leave anything out on the race track?
Max Verstappen: No, I don't think so. My lap was pretty good, just lacking a bit of rear grip in the lower speed corners to my liking. Overall I think it was quite a decent qualifying and let's see how we will go tomorrow in the race because it is very hard on tyres, so I hope we made the right compromise on that.

You say you made the compromise so what can we expect tomorrow? From what you've seen through free practice how hard can you push the Mercedes?
MV: It's always a bit difficult to say. I definitely do think they picked up their pace today so tomorrow it will be hard to beat but we have different tyres available so let's see whether that works to our advantage or not. I just hope it will be an exciting race; that's the most important thing.

Your teammate Alex lines up beside you, as a sort of rear gunner. Does that give you extra support when you are going into what is a tricky first corner here.
MV: Yeah, well let's see what happens. I'll just try to focus on myself and try to stay close to the Mercedes cars and I'll see if somebody can follow us.

Valtteri, well story of the season really. You are close but just a little bit lacking in the outright performance to Lewis. You have the opportunity to see the live data during qualifying, where were you better than Lewis on the lap and where did he have the legs on you today?
Valtteri Bottas: I don't really know actually. It felt good and that's the problem, when it feels good and that you are extracting everything out of the car but the lap time is not there. That's the most confusing part. Yeah, I can't really say much at the moment. There were no mistakes and the last lap I thought was really good. It's just like small things here and there. There's no one clear corner, so I need to find out, but at least it's another front row lock-out for us.

That gives you a good opportunity as it is a tricky run down to that first corner. It sounds to me that instinctively you know that was a tidy lap and you say the time is just not there. Do you think that you have an underlying issue in terms of the performance of the car or do you think it's just one of those things, today the car doesn't give you the feedback?
VB: I don't think there's any underlying issue really with the performance of the car. I think it's there and the long runs were good so I'm looking forward to tomorrow.

Lewis, your 98th pole. By the end of the season you could have done a century. That could be a nice number to round out what has been a championship-winning year. It doesn't look like the celebration of winning that seventh title slowed you down any!
Lewis Hamilton: That's because I didn't really celebrate too much. I really didn't celebrate to be honest. I was training and making sure I was ready for this; keeping my mind and my eye on the ball. This is the continuation of what we are able to do together as a team. I continue to be amazed by my guys that work so hard weekend-in, weekend-out. Now they're away from their families for three weeks. No matter the seasons throw at us it's always a really tough year and I appreciate them. To be out here in Bahrain and put laps like that together... I came today and I was like 'let's just have fun and enjoy'. That's the most important thing: to enjoy what you are doing. I think with the pressure a little bit off, it's a bit of a release to go and drive like I just did.

I've heard you before that you've never driven the perfect lap. That you aspire to it but there's always somewhere you could have improved. So what was this Bahrain pole like?
LH: What was the lap like?

If there was more time to be gained, could you? And why didn't you?
LH: I am on the ragged edge naturally. You know how it is on a lap. It's about trying to find that perfect balance. You want to take quite a lot on the way in and keep the exit. You want to have your cake and eat it. It's about just chipping away at it during the lap. I think the lap started off really well. There was probably a little bit of time in Turn 1. Just a little underperformed I would say a little bit towards the apex but after that it was good. Six was a little slow; I probably could have gone a little better there. I could talk you through the lap and I can tell you there is always a little bit here and there but the next lap I go out maybe I'll improve there and lose somewhere else. Otherwise it was a very clean lap. I generally stayed about two and a half tenths up throughout it, so I was really happy with it.

Lewis, a tremendous lap to taker the 98th pole of your career and your 10th of 2020. You found half a second on your final lap of Q3. How pleased were you with how it all came together?
LH: Yeah, well it has been a good weekend so far in terms of the steps we have taken and understanding the car. It was quite a difficult day yesterday, with practice and using different tyres; it was quiet confusing. But today has been a good day. We did some really good work overnight and the decisions we took after P3 into qualifying were pretty spot on. I was really happy with the car from the get-go in Q1. All the laps had been good and then I got to Q3 and Q3 run one was OK, but there was plenty of room for improvement. Fortunately I managed to do that on the last night, so really happy with that and really grateful to the guys who I think this weekend seem a little bit more relaxed, naturally, as the pressure is off. I think we are all enjoying it a lot more. It's definitely more enjoyable when you don't have the pressure as much and you can just do what you do to the best of your ability without any additional added pressure.

After the slippery conditions of Turkey last time out, how much fun was it to push on a track like this?
LH: Oh man, it's been night and day. To go from there to here where it's a really aggressive track surface on our tyres, naturally. It's not even too hot here. In times before we have come here and it's been 50 degrees C or 60 degrees, track temp I mean. The track is not even at 30 degrees. But it's high-speed corners and there's a lot of surface temperature that we create with these tyres. That's why you see us going out and doing these laps, back to what we used to do earlier on in the season. The car feels so much better when the tyres are working naturally, so I much preferred driving this weekend.

Valtteri, you pulled yourself onto the front row in the dying moments of the session. Just talk us through the lap at the end of Q3?
VB: The end of Q3 lap was actually really good. It felt like there was not much more to really find, that was the feeling when I crossed the line, so I was pleased with that. But obviously it wasn't enough for pole and I was quite surprised when I saw the gap. I think we ended up with quite different set-ups, with Lewis, and we'll see if that makes any difference tomorrow. He's had a really good weekend overall, every session and all the time I've had the feeling that I definitely have the speed but I haven't quite put it all together. I got it together at the end but obviously it wasn't enough.

Max just one tenth of a second off Valtteri in P2. How good was your final lap in Q3?
MV: Yeah, it was alright to be honest. Just following a bit the track progression and stuff and yeah, not much to say really, it was alright.

Are you pleased with your car's performance relative to the Mercedes so far this weekend?
MV: you always want more. But it's more important to just stay realistic and work on the little things, right? And there is of course still some work to do. Overall, I think the weekend in general was pretty positive, just lacking a little bit too much in qualifying I think. I don't know why that was exactly. We have to find out. But first we'll see what we can do tomorrow. It's quite aggressive on tyres here so hopefully it will be quite an interesting race.

Do you think you are in the running for victory tomorrow?
MV: This is always difficult to say at the moment. First we'll have a good sleep and then find out tomorrow.

How much track evolution was there during the session?
MV: I think initially in Q1 it was really big, because you have to drive off the rubber of the previous categories. I don't know what was driving before, the Porsches I think. I was one of the first cars on track, which was maybe not the best choice but the lap was good enough. From Q2 to Q3 the steps were smaller but the evolution was there.