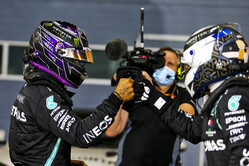 Lewis scored the 98th pole position of his Formula One career - his tenth of the 2020 season and third at the Bahrain International Circuit. Valtteri set the second fastest time in Q3, securing the 75th front row lockout for the Mercedes-AMG Petronas F1 Team.

Both drivers will start the 2020 Bahrain Grand Prix on the Medium tyre.

Lewis Hamilton: 98 poles, wow! There is always more time to find, small places to improve, but it was a really clean lap for me today. I'm not sure why, but I've felt so clear-minded this weekend. I just wanted to have fun today and that's the most important thing for me. I've been doing this a long time now, but I still love this challenge, of trying to understand the tyres, fine-tuning the car. I love what I do, and I can still feel myself improving all the time. And you can see it's not just me, but everyone in the garage too is just enjoying their work. The pressure of fighting for a championship is immense, but with the titles both secure that gives me that feeling of release to go out and drive like I did today. Today is the continuation of the special things that we're achieving as a team. Weekend in weekend out I'm amazed by this group of people. No matter what has been thrown at us this year we've risen to it. For me it's important to use these final three more races to learn as much as possible and carry that on into next year.

Valtteri Bottas: My second Q3 lap actually felt good today - but that's the tricky part when you feel like you're extracting everything out of the car and there's still lap time missing. I made no mistakes and my last lap felt were good so we need to find out this evening in the debrief if there are areas we can improve around the lap. Lewis and I went into different set-up directions with the cars, so that might have played a role. But it's great to have another front row lockout for the team today. I'm looking forward to tomorrow; it'll be an interesting race with different strategies and everyone trying to keep the tyres from overheating, so I think we can expect a good fight.

Toto Wolff: For a Saturday, it was a good day in the office. We weren't quite sure how much performance Verstappen really had left, so we're happy we managed to lock out the front row. Tomorrow is going to be fairly tricky; Verstappen has a second Hard tyre and will most likely run a Medium-Hard-Hard strategy which, on paper, is the fastest strategy. But we're going to do everything to put up a good fight. It's going to be an exciting race an we're looking forward to putting on a great show under the lights here in Bahrain.

Andrew Shovlin: A great result for the team and a seriously strong session by Lewis. He looked to have everything well under control from the first run, so congratulations to him. It's not completely straightforward, we've been battling a bit with the car balance and throughout free practice we were struggling to get everything in the right window. However, in qualifying it came together nicely and we were able to find more and more time as the track gripped up. We're happy that we have both cars starting on the Medium tyre but we're expecting to see some differences in the strategy tomorrow as a number of teams have carried an extra Hard tyre into their race allocation. Our long runs on Friday were distinctly average so we've made quite a few changes coming into today and hopefully we can keep the tyre temperatures under control during the race. It's also a track where you can overtake, where degradation plays a big part in the strategy and where you can undercut from a long way back which should make for an exciting race.