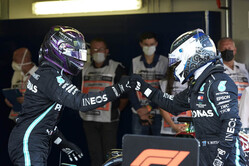 The first corner incident in Turkey finally put Valtteri Bottas out of his misery. Still clinging on to the almost impossible mathematical chance that he might yet cause the biggest upset in the sport's 71 season history, the Finn finished the race a lap - and 110 points – down on his teammate and seven-time world champion.

As the Finn continues to channel David Coulthard, insisting that now he is free to focus on next season, Lewis Hamilton says the points difference between the Mercedes pair doesn't tell the true story.

"Naturally, Valtteri has been getting stronger and stronger each year and the media have commented on Valtteri 2.0 etc, and every year you can see him grafting and chipping away trying to raise the bar in so many different areas," said Hamilton. "You've seen this year that, while, yes the points gap is what it is, if you look in a lot of the qualifying sessions it was the smallest of margins.

"So closing the gap in qualifying, as he has done this year, has made it quite challenging," he continued, "it already did last year, but I would say more so this year.

"In race trim, naturally, you can see that the consistency I've had this year is what's made the difference. If you look on the race weekends it was so close, but of course there is a points gap of seven points and if you have that consistently over a period of time...

"Valtteri was also unfortunate with reliability issues," he added, "so that makes the gap look even bigger than it is."

Hamilton has out-qualified Bottas 10-4 this season, and has completed all 838 racing laps, the only driver to do so.

Other than his first lap misfortune in Turkey, Bottas missed out on a certain second in the British Grand Prix following a tyre deflation issue, lost out at Monza following a "very, very messy start", and retired from the race at the Nurburgring with an engine issue.

"People need to give Valtteri his due respect," insisted Hamilton. "You've got to remember who he is driving up against, it's not easy being my team-mate, but he comes in weekend-in, weekend-out never moaning or complaining about how the car is.

"It is always that he says he has to do a better job, and I don't know another driver who does that here," he added. "I think that's something we have in common, we come into these weekends with a fresh head and mentally he is one of the strongest drivers here."

"There are still three races," added the Finn, "so to get the overall picture from this season there's still a lot you can do and try to get a positive ending.

"It's a fact that for me the championship is lost, but I still keep pushing and if I look back at this year there are many positives I can take. I have been able to improve in many areas, for sure not still enough to win the title, but I'll keep pushing.

"Yes, there were some unlucky races where I lost some points, but there were also races where Lewis was better than me and that's, in the end, how he made the difference.

"Sometimes it was just very fine margins about how qualifying or the race ended up, in terms of what kind of strategy I was pushing for or how things ended up.

"In this sport the points difference can look pretty big now, I know, but, in the end it comes down fine margins and I've been unable to be consistently at such a top level as Lewis has this year and that made the difference. It's not a lot but it was enough to win.

"That's something I'll keep pushing on for the future, because I feel I'm getting better each year," he insisted, just the merest hint of a Scots accent seeming to become apparent. "That gives me hope and motivation and that will to push more and try to keep growing for the future, so I'm looking forward to next year."