Hamilton, like Schumacher, has "God given talent", says Brawn 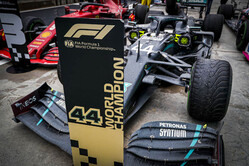 Ross Brawn, who has worked with both of F1's seven-time world champions, Michael Schumacher and Lewis Hamilton says both drivers have "God given talent".

Having worked with Schumacher as the German collected titles with Benetton and Ferrari, Ross Brawn was subsequently responsible for helping lure Hamilton away from McLaren to Mercedes.

Though he had left the team by the time the Briton started winning with the Silver Arrows, Brawn has seen first-hand the various similarities the two F1 legends share.

"Lewis showed why he is such an exceptional talent," writes Brawn in his race debrief for the official F1 website.

"I'm always engaged by the running commentary from Lewis during the race on team radio, suggesting things aren't going well, which is always entertaining... but he always delivers.

"In Turkey, despite his Mercedes team struggling for pace all weekend on a slippery surface in cold conditions, he stayed patient in the race, strategized and pushed when needed to," admits the Briton. "He got the tyres working when no one else could. It was the perfect demonstration of what he is, a seven-time world champion, equalling Michael's record.

"It's the kind of dominance that in most people's motorsport career, you only see once. I've been blessed to see it twice.

"I have been fortunate to work with both Lewis and Michael. They are different characters, which is wonderful as you don't want metronomic characters in F1. Lewis is different to Michael in the way they approach things. At the core of it, they both have a God given talent.

"It's hard to pick a weakness in his Lewis' armoury," admits Brawn. "He sometimes seems to get emotional on the radio but the team know how to handle that through the calmness of his engineer Pete Bonnington. Bono doesn't get fazed by anything Lewis says and has a great riposte when he gets too excited. Everyone in that team works so well together.

"Sunday wasn't an easy win. He didn't put the car on pole and disappear into the distance. It was a challenging weekend for him, regarding the weather, the conditions and the track. Clearly, it didn't initially suit Mercedes but they got they head down and thought about it. He came from further down the grid today. He wins when he's not given any opposition and he wins when he is given a big challenge."

While singing Hamilton's praises following his Istanbul masterclass, Brawn admits frustration with the performances of some of his rivals.

"I appreciate drivers were not happy with overall grip levels, but it was a consequence of the late decision to race there as the calendar was revised to respond to Covid-19.

"I think drivers sometimes need to remember it's a competition of who crosses the line first so while grip levels weren't high, it was the same for everyone. Some drivers got their head down and came to terms with it, others found it a distraction.

"Having a challenging surface as we had this weekend was no bad thing. It showed a driver's talent to the max. I don't think grip levels are a measure of the level of competition you will have.

"Competition needs to be fair and equal. It's a sport, so we need to give everyone same opportunity. It's challenging, but that should be seen as good thing.

"As an example, Monaco has always been seen to be a very difficult event and race, but if you came to terms with it and looked on it positively as a big challenge, then you would succeed and win races there. If you went there in a negative frame of mind, you didn't succeed.

"Turkey didn't have the grippiest surface, but those who knuckled down and thought this was an opportunity had success."