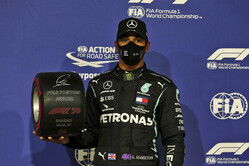 All the top 10 on the grid chose to go through Q2 on the P Zero Yellow medium tyre and therefore start on this compound, which should cope well with the high-wear characteristics of Sakhir and allow them to run a longer first stint. As usual, those starting from P11 downwards will get a free choice of tyres.

Mercedes driver Lewis Hamilton set a new track record twice in qualifying: during Q2 with the P Zero Yellow medium and then again with the P Zero Red soft in Q3 to seal pole.

The rough surface of the Bahrain circuit takes a lot out of the tyres, meaning that a two-stopper is most likely but drivers will still have to manage their tyres carefully: particularly the rear softs.

Both ambient and track temperatures were 27 degrees centigrade halfway through the session: relatively cool for Bahrain compared to previous years when the race was held much earlier in the season.

With the abrasive granite surface of Sakhir, and a softer tyre nomination compared to last year, a two-stop strategy looks set to be the quickest way to tackle the 57-lap Bahrain Grand Prix.

The fastest two-stopper involves one stint on the P Zero Yellow medium for 21 laps, (set to be the opening stint for those in the top 10 of the grid) plus two stints on the P Zero Red soft tyre of 18 laps each.

The second-quickest two-stopper instead uses the medium for two 21-lap stints and the soft for 15 laps.

A medium-hard one stopper is slower: this would use the medium for 27 laps and the hard for 30 laps.

Finally, there's the slowest two-stopper: two stints on the medium of 18 laps with one stint on the White hard of 21 laps (probably the middle stint). There's no real point in going for a three-stopper, as this costs too much time in the pits.

Mario Isola: "The strategy for this race really began in Q2, with nearly all the drivers coming out on medium tyres, before a red flag stoppage with nine minutes remaining meant that there was only one run left to make it count. With the top 10 all starting on the Yellow medium tyre tomorrow, they have some options as to which compound to run during the second stint. We saw in qualifying that the pace of the soft and the medium is closely matched, however the medium is easier to manage in terms of rear overheating, which is why it was selected in Q2. We also saw that Hamilton was able to break the track record not once but twice, on two different compounds, which confirms the ever-increasing speed of the current Formula 1 cars. In Formula 2 earlier, there was another strategic race with plenty of overtaking that keeps the title battle well and truly alive."