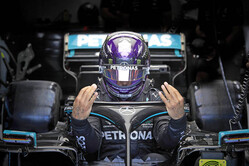 Lewis Hamilton set the pace earlier, ahead of teammate Valtteri Bottas, however, with qualifying and the race taking place later in the day - in fact early evening - conditions in FP1, like FP3, were such that the sessions are pretty much irrelevant. Indeed, much of this morning was spent focussing on 2021 tyres and upgrades.

The sun has set and the circuit is bathed in artificial light.

Minor floor damage brought Verstappen's session to an early end, while Raikkonen and Russell were replaced respectively by reserve drivers Kubica and Nissany.

One thing that was apparent earlier was the wear many drivers were encountering with their fronts, particularly the left, while there were also a couple of spins, Romain Grosjean doing well to keep his Haas out of the barriers.

Also, as the FIA continues to crackdown on track limits, drivers had their times deleted on no less than 17 occasions.

The lights go green and Raikkonen and Latifi lead the way, followed by Albon, Russell and Leclerc. All are on the prototype tyres.

More and more drivers head out, all sporting the new rubber, which, according to Leclerc, was only good for one lap earlier.

Bottas warns that his steering is "still a bit right down".

Giovinazzi is on the hards as the first wave sees Sainz topping the timesheets (30.989), ahead of Verstappen, Ocon, Albon and Kvyat.

As Raikkonen has his time deleted, Norris, like Giovinazzi, is on the hard rubber.

As Gasly complains at the antics of Bottas, Verstappen laughs off a very close encounter with Perez. Different strokes...

The Ferrari pair switch to mediums, as Vettel complains of massive understeer with the prototypes. "I don't think these tyres are very relevant," he reports.

"Who is that in front of me," enquires Verstappen, "he's drifting very nicely." "It's Hamilton," comes the reply. Meanwhile the world champion complains "I've got no grip out here".

Gasly splits the Bulls with a 29.827 as the yellow-banded tyre appears to be the go-to.

Ricciardo, Vettel and Giovinazzi are the first to switch to the softs, the German only managing 6th (30.110), 0.792s off Verstappen's best on mediums.

As in FP1, Verstappen appears to have an issue with the floor of his car, as mechanics check for damage. Elsewhere, Sainz takes full advantage of the over-generous run-off at Turn 7.

The Ferrari looks a real handful, as Vettel complains of vibrations.

Verstappen (softs) goes quickest in S1, but loses time in the second sector, failing to improve on his best time on the mediums.

Told he'll be doing a double slow lap, Verstappen reports that he ran out of power before the line.

The session is red-flagged when Albon crashes in the final corner. Replay shows the youngster running wide, trying to catch it but having no control whatsoever as the car snaps one way then the other.

Having told his team he is OK, the Thai sighs: "Sorry guys". The car is badly damaged front and rear.

The session resumes with 32:00 remaining.

The lights go green (again) and the Renault pair lead the way, followed by Hamilton... however, the session is red-flagged as there is a dog on the track.

As the drivers head back to the pits, the cameras pick up on the dog making his way out of the circuit.

The session resumes and the drivers return to their programmes.

Hamilton, who has yet to run on the softs, begins his flying lap. Setting a PB in S1, he posts another in S2. At the line the Briton posts a 36.107 after losing time behind Gasly in the final sector.

Vettel, Giovinazzi and Norris are back on the prototype tyres.

"Jesus Christ, what is this Haas doing," fumes Verstappen, echoing a question that has been running through Guenther Steiner's mind for the last couple of years.

Fitting a fresh set of softs Hamilton goes quickest (28.971), but this will leave him a set short for FP3. Bottas and Ricciardo have also used a second set of softs, while the rest have opted to keep a set of the red-banded tyres and instead run the mediums or hards.

Adding to the conundrum in terms of tyre strategy is the fact the drivers had to use the prototypes.

"The rears are already gone, it's crazy," reports Latifi. The Canadian is currently 18th, ahead of Grosjean and Russell.

As the clock ticks down, all bar Albon are on track.