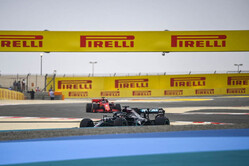 Ahead of today's opening session, the air temperature is 26 degrees C, while the track temperature is 27.2 degrees C. We are in the desert... but it has been raining and as a result the track is very slightly damp. Indeed, there still a few spots of rain in the air but not enough for the Inters, far less full wets witnessed in Turkey.

Talking of tyres, the teams have been given two sets of the C3 compound to be used next season. Both sets can be used in either FP1 or FP2, at the discretion of the teams, and for a minimum run of six timed laps each but at least one of these two sets must be used for six timed laps in FP2, even if it has been used in FP1.

There are two reserve drivers on duty this morning, Roy Nissany at Williams and Robert Kubica at Alfa Romeo.

The lights go green, with Verstappen leading the way, and in no time at all there are 14, 15, 16 drivers on track, including most of the big guns. Latifi and Hamilton are the last out.

A fair mixture of all three 2020 compounds as well as the prototypes.

Magnussen posts the first time of the weekend, a 35.524 set on the prototypes.

Other than tyres, the teams are also looking ahead to 2021 in terms of their cars, and as a result flo-vis and aero rakes are in abundance. Nissany's Williams sport's a massive gate at the rear.

As ever, the FIA is cracking down on track limits, albeit at just one corner (Turn 4), and right on cue Grosjean is the first driver to have his time deleted.

A 31.014 sees Hamilton go top, ahead of Bottas, Sainz, Ricciardo, Albon and Norris.

As Bottas seeks to improve the Finn locks-up his front-left in Turn 10. Meanwhile, Hamilton improves to 30.503.

Kvyat splits the Mercedes with a 31.020, as Albon leapfrogs Ricciardo for fourth.

The Mercedes pair set their best times on hards, while Kvyat is on softs and Albon prototypes.

Another lock-up for Bottas leaving his left-front in a terrible state.

After 15 minutes, Verstappen, Ocon, Gasly and Nissany are the only drivers yet to post a time.

Hamilton joins the growing list of drivers having their times deleted, the world champion among the first to commit the offence twice.

A number of teams are splitting their strategies, among them Renault, where Ricciardo is on softs and Ocon hards.

Latifi is back in the garage, where his car is up on its stand.

The Bulls head out on fresh softs, an early switch for the Austrian team.

Hamilton switches to the prototype tyres, as does his teammate.

Bottas posts a 30.277 but this is almost instantly beaten by his teammate who crosses the line at 30.133.

Grosjean goes off at Turn 6 following an almighty wobble in Turn 6. He does well to avoid the barriers.

"My tyres are gone," reports the Haas driver as he slowly makes his way back to the pits with a left-rear puncture.

Moments later, Leclerc spins in Turn 2, the Monegasque losing the rear as he applies a little too much power.

Yet another front-left lock-up for Bottas in Turn 10.

Perez improves to second, splitting the Mercedes pair, the Mexican stopping the clock at 30.201.

Currently 10th, Ocon is advised that he is the fastest driver on hards.

At the forty minute mark, when a set of tyres have to be handed back, the Mercedes pair remain on track on the prototypes, as do the McLarens.

On the mediums, Gasly goes quickest with a 30.049, as Hamilton also switches to the yellow-banded rubber.

"Get rid of the track limits," replies Kvyat when told that he has had his time deleted again.

A spin for Verstappen in the final corner on the prototypes. "Lovely," he sighs, "I think the tyres are flat-spotted."

Moments later, Bottas is warned of possible rain. "Look out for spots," he is warned.

"Even one lap on these tyre on this track, we know how bad it is," sighs Leclerc, as he continues on the prototypes.

Wanting to come in for a front wing adjustment, Vettel is told that he must first complete the programme with the prototype tyres.

"FP1 & FP3 track conditions are very different to what we'll see in FP2, Quali & the race," says Mercedes. "So, they aren't particularly useful for car balance and set-up, but we can still gather understanding of the tyres and try out test items during the sessions."

Sainz improves to fourth with a 30.018 on the prototypes. Shortly after, Vettel improves to tenth on the softs as his teammate also switches to the red-banded rubber.

Replay shows the Monegasque having to take avoiding action as he comes across a very slow Gasly on the racing line. "What the hell is he doing?" asks the Ferrari driver.

Lots of track action in this session - with the Mercedes pair both having completed 35 laps - as the teams look ahead to 2021. Flo-vis is still very much in evidence.

As the clock ticks down, work continues on Verstappen's car which is understood to have suffered some floor damage. The Dutchman remains in his car, keen to get back on track again.

As Albon is told he has time for one more fast lap, Verstappen climbs from his car, his session clearly over.