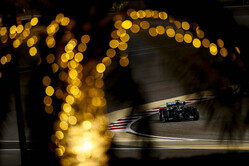 Mercedes driver Lewis Hamilton was fastest in both sessions: in FP1 on the P Zero Yellow medium tyre and then in FP2 on the Red soft tyre (this year in the C4 compound for Bahrain).

The tyre gap is not easy to define because today's running was somewhat influenced by the 2021 tyre tests and a red flag stoppage. However, the estimated gap is currently around 0.6 seconds between hard and medium, with the same difference between medium and soft.

The FP1 session was more representative than usual, with temperatures in both sessions being quite similar.

Mario Isola: "In comparison to last season, this was a more aggressive nomination by bringing the compounds in the middle of the range to Bahrain, with the softest choice being the C4 compound this year. It was quite a busy couple of sessions today, with each car running two sets of our 2021 tyres in C3 compound during both FP1 and FP2, allowing both us and the teams to collect plenty of data on new and used examples of these tyres. Now we have plenty of information to analyse before trying these 2021 tyres again in Abu Dhabi. Coming back to Bahrain this weekend, compared to the usual calendar slot earlier in the year, we had quite similar conditions in FP1 and FP2: with track temperatures around 26 degrees in both sessions. This gave teams the chance to test the tyres in conditions more similar to the race, and perhaps concentrate more on race pace. All the tyres performed in line with expectations today, considering also that the track was quite slippery. The soft compound showed no graining, but as is usual in Bahrain, it will be particularly crucial to manage the rear tyres to prevent them overheating."