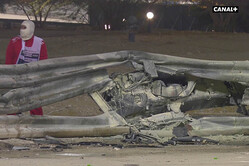 F1 MD, Ross Brawn has confirmed that the sport will carry out a "deep analysis " of Romain Grosjean's horrific accident at the start of today's Bahrain Grand Prix.

While the sight of the car engulfed in flames was horrific enough, it was the image of the Haas broken in two, the front half having gone through the barriers, that truly rammed home the horror of the incident and how lucky the Frenchman was to escape relatively unharmed.

"We need to do a deep analysis of what occurred,” said the Briton, who over the years has created championship winning cars for Benetton, Ferrari and his own eponymous outfit.

"Barriers splitting was a classic problem many years ago and normally resulted in a fatality," he continued. "There's no doubt the halo is the factor that saved the day... saved Romain. The team behind it need credit for forcing it through. I don't think anyone can doubt the validity of the halo. It was a lifesaver today.

"It's a tribute to the work that the FIA and the teams have done over the years," he added. "I remember the controversy of the halo when it was introduced. And I have to give credit to Jean Todt, because he insisted that it should come through.

"Today, we might be looking at a different situation if we didn't have the halo. And for me, that's what prised, and managed to keep the barrier apart, when the car went through it.

Asked about the fire, he said: "It was a high G-load, and we have to look at how things failed.

"The car came apart and we had a fuel fire, which we have not had for a long time. "Those cars are carrying 100 kgs of fuel and if that went up, it would have been a very big fire.

"There will be some careful scrutiny between now and the next race and action will be taken that needs to be done and it is something we have not seen in a long time and something we did not predict.

"It's shocking for everyone in F1 to see an accident of that severity," he continued. "We're not used to that, fire being involved as well."

The Briton was also keen to praise the work of the marshals and Ian Roberts, the FIA's medical rescue coordinator.

"Credit to everyone," he said. "Clear thought, clear purpose. They didn't hesitate., they did exactly what they needed to do today, and you can't fault them.

"We're proud to have them all. And I think it's very reassuring for the drivers to see that level of professionalism, and that response. And from that respect, I think it was perfect.

"Obviously, we don't want to see an accident like that. But in terms of the response. I can't really think there could have been anything more effectively done."