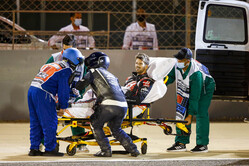 Grosjean started the race from 19th on the grid but was involved in contact through the exit of turn 3 and suffered a heavy impact with the barriers at substantial speed. The VF-20 erupted into flames upon impact and was torn in half but Grosjean was able to extricate himself from the cockpit before quickly being tended to by the FIA's medical crew. Grosjean was fully conscious at all times - the Frenchman eventually taken by helicopter to the Bahrain Defence Force hospital where he is being treated for burns to the back of both hands. He will remain in hospital overnight as a precautionary measure.

Magnussen took the start from 18th place on medium tires but the race was halted in the wake of team-mate Grosjean's accident. At the restart Magnussen strived to gain positions but picked up damage to his front wing when trying to avoid the rolling Racing Point of Lance Stroll. Magnussen came in for a new front wing, changed to the hard compound, and then made a second stop on lap 28, again taking on a second set of hard rubber.

Magnussen ducked into the pits for a third time on lap 54 under the Safety Car, moving onto softs, but the race did not resume as the 57-lap distance was reached before Sergio Perez's Racing Point could be safely retrieved. Magnussen was classified 17th.

Haas F1 Team will be back in action for the Sakhir Grand Prix, to be held at the Bahrain International Circuit, from December 4 to 6.

Kevin Magnussen: "Firstly, I'm just very, very happy to see Romain walk away from that crash - it was unbelievable. To see him survive that is frankly a miracle. I'm so happy that the halo was introduced, and it was on his car. Without it I'm sure it would have been very different. That's really all from me today. I'm just happy that we've still got Romain."

Guenther Steiner: "We got fortunate today. The good news is that Romain is doing well considering what happened. We are thankful for all the safety advancements in modern Formula 1 in order to protect the drivers. We send a thank you to the FIA safety team and the marshals who were on-site immediately to help Romain get away from the scene. As I said, I think we got lucky - there's not a lot more to say. We hope Romain will recover quickly from the injuries he sustained."